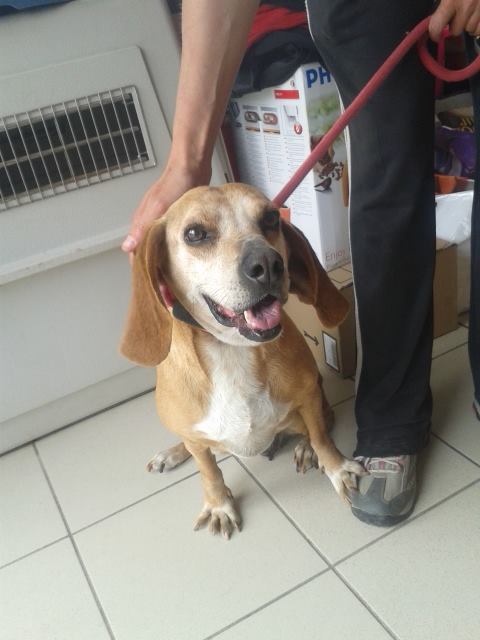 After all the excitement of yesterday, I thought I would let you know what else has been going on at the refuge.

The old beagle who arrived on was reclaimed. This is excellent news. We had not given up hope of finding her owners, as we have a wonderful network of helpers who were about to launch into action, but it is even better that her owners were looking for Vicky (or Lily, as she is called in real life). Some of you may know that I have an old beagle called Lily myself, adopted from the SPA when she was about ten years old and supposedly “past her best”.  I have a very soft spot for the breed, so I am delighted for Lili. Especially as she too is 10 years old

The owners were not happy when they came to collect her, as in their opinion we should have contacted them. We pointed out that the details on the database that corresponded to the tattoo were out of date, but they were upset that we had not called the phone number that was “clearly marked on her collar”. Except it wasn’t. There was nothing on her collar at all.

It is very important to keep your details up to date at the central database. Otherwise it takes a bit longer for us to contact you, assuming we are able to track you down that is! It is a good idea to put an engraved medal on your dog’s collar with your phone number on it, rather than just using a marker pen as in this case. Or if you do use marker pen, make sure it is indelible! This is also the case if you know that your dog’s tattoo is a bit hard to read, due to age.

Today we had three new arrivals. One of them was identified and hence was collected immediately, but the other two are not identified and so are still with us. First a tiny wee girl who was found at the gate; she is about the size of a papillon and hopefully someone is looking for her. She is not in the first flush of youth.

Second was another little girl, this one found in the local village or Cuxac Cabardes. Information on both will be available soon, after they have been to see the vet.

I am sure that like me many of you were wondering how James got on with the dogs who left yesterday. Moira and James have been in touch, and all is going well. So once again thanks to everyone for this heroic effort, especially Moira and James. And yes, of course we will pass on news of the dogs as each of them is homed.

Here is the link to the database, where you can change your dog’s details if they are not up to date (thanks for the suggestion, Helene) 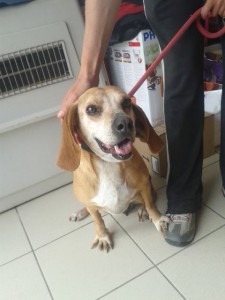 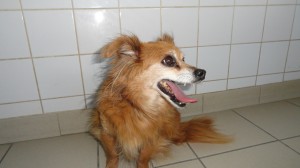 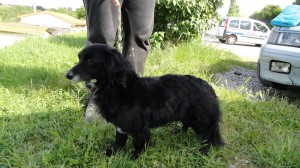