Catch up on two Sunday adoptions

There were no adoptions today, but we have news to catch up on from yesterday. It was a wonderful Sunday, as two dogs left for new homes.

First off was puppy Kookai. No, you are right, you have not heard of this dog, nor seen him on Facebook. This is because this lad arrived with parvovirus and was under transfusion at the vets for several days before being well enough to come back to the ScPA. This disease is a nasty one, and is particularly dangerous to puppies and weaker dogs, and its arrival at any refuge is cause of much dread.

Luckily Kookai made it through, and even more luckily, he has a new home before having spent a single night outdoors. 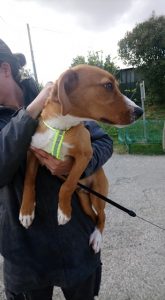 Next to leave was Lee Roy. He arrived just a couple of days after amstaff Connord left for his foster home, and many people commented on the irony. Like Connord Lee Roy is category 2, like Connord, LeeRoy was identified but there was no sign of his owners. However unlike Connord, Lee Roy has left the ScPA in double quick time.

Huge thanks to his new family. They have had categorised dogs in the past, so although the final piece of the permitting process took a long time, it was quicker than it could have been, and lovely LeeRoy has a great new home.