What a wonderful day it was today. There were three adoptions, and one of them might just be the adoption of the year. Read on!

First to leave was Sisco, sometimes called Scar, and soon to be renamed again. But that is fine, this boy hasn’t been at the ScPA for very long at all, and will soon adapt. He has gone to live with Lisa and her family, and will spend his time between France and the Netherlands. Lisa herself is in dog rescue, and is a superb handler. She was looking for a companion for her tiny scared female who recently lost his pal, and the family wanted a dog who was okay with cats and who could accompany his new dad on long walks.

Sisco had already caught the family’s eye, and once he had passed the cat test, the family plus dog took him for a walk. He was just what they were looking for, and they were delighted to be able to take him home straightaway. 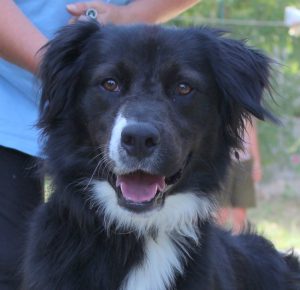 Although he was third to leave, I will talk next of the adoption of Scooby. He is a lovely small-ish fluffy dog who was brought in for rehoming in May at the age of just one year. He was extremely timid at the time, but thanks to both staff and volunteers he has made huge progress at the refuge. Sadly the one thing they were not able to cure him of was his poor attitude to cats, as otherwise he would doubtless have been adopted long-since.

However not everyone has cats, and Scooby now has a wonderful new family and a long and happy life ahead of him, we are sure. 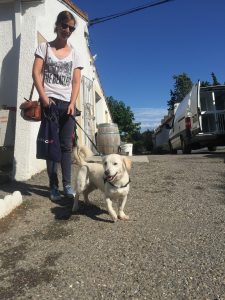 Now to today’s big news. The adoption of none other than Tyson. This magnificent white shepherd has been at the refuge for most of his life. He is now eight years old, and has been with us for two and a half years. And before that he had spent about the same amount of time at the shelter before an unsuccessful adoption.

A young woman came to the refuge today having seen photos of a quite different dog online. She took the other dog for a walk, but he was a bit too lively and not quite what she was looking for. So after another tour of the refuge she came across Tyson. As well as being devastatingly handsome, he is a real gentleman on the lead, and all of a sudden things were looking up for one of our long termers. 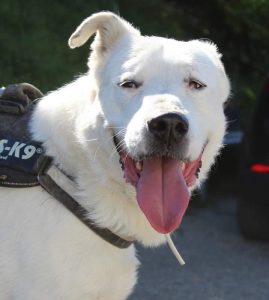 Next came the introductions to her other dog, a small male, and that went wonderfully well. Everyone held their breath…..YES, Tyson’s turn was finally here!

Carole phoned Marie, Tyson’s sponsor, who rushed to the refuge. Maire loves Tyson, and were he fine with cats he would definitely be at her home. But she loves her cat even more than she loves Tyson. A few tears were shed (okay, a LOT of tears were shed) and Marie and Tyson’s new mum exchanged phone numbers so they could keep in touch.

There was hardly a dry eye in the house as Tyson finally left the refuge. And it was noticeable how relaxed he was while getting into the car; he has Marie and the other volunteers to thank for this. The dogs go on regular outings, meaning that car trips are nothing new. Little does Tyson know that this time he has not just gone for a walk. 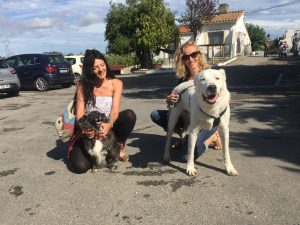 Tyson says goodbye to Marie and leaves with his new mum

All in all it was a fabulous day, and we know there is at least one lucky dog leaving tomorrow, so see you then!

2019-08-20
Darcey Dyson
Previous: Adoption of Jasmine
Next: One and Two makes Three