Chanel has the banana!

I had to leave the refuge early as one of my dogs had to go to the vet for an emergency grass-seed-from-nose extraction. However when I left things were not going well. Four dogs had been brought in, one of whom is a Pyrenean Mountain dog, who arrived weighing 26kg rather than the 50kg that he should be. His toenails are so long they are curled back on themselves. A sad sight indeed. We will soon have Hoffen up on his paws and the change in him will be dramatic, but how sad that such a magnificent creature should be allowed to get into this state. We suspect that his toenails have grown this way due to Hoffen having been enclosed in a small space; let’s hope he is soon adopted and really understands the meaning of freedom!

On the plus side, a lovely couple came to adopt Chanel, who was abandoned by her owner a couple of weeks ago. This couple travelled a long way and were delighted with their new dog. Happy smiling faces all round! Just look at Chanel. I love the French expression to “have the banana”, but it is only when you see dogs smiling like this that you understand it properly!

And yes, we know that Chanel has the opposite problem to Hoffen, but a sensible diet and more exercise will do wonders and I have been promised photos once Chanel is back to her slimline self!

The other BIG adoption of the day was that of Grizzli. He is going to have a lovely time in his new home and it is great that his time at the refuge was so brief. Let’s hope Hoffen is as lucky!

I am off for a week or so, leaving you in the capable blogging hands of Moira. Looking forward to lots of good news when I get back!

Chanel has the banana! 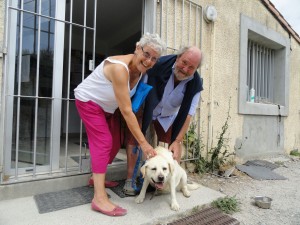 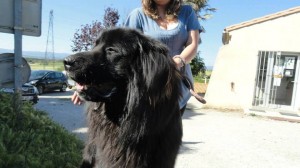 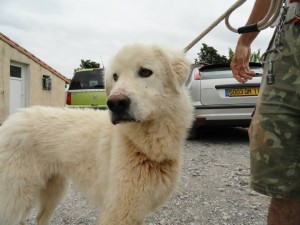