Posted by: Jane Hartley in Life After The Refuge December 11, 2014 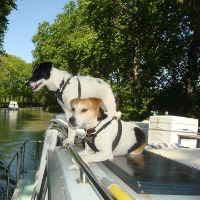 As new retirees currently living in France with our four year old Jack Russell, it seemed an ideal time to adopt another dog. After making enquiries we found the SPA Carcassonne, the best & most regularly updated website in the area, in our opinion.

An on line romance

We had already decided that we would prefer a younger female dog to join our family. From the information on the website several dogs caught our eye so we telephoned and made an appointment to visit. There are so many deserving dogs at the SPA, it would be easy to adopt half a dozen!

All we know about Clara is that she was abandoned at the gate with her brother and at just over a year old were potentially unwanted (unsold) puppies? She was quite ill at first with a stomach upset so couldn’t come out to meet us straight away but once we saw her it was love at first sight. So with an open day coming up we reserved Clara on the spot just in case she caught someone else’s eye!

Our second visit was to introduce the two dogs & to check their compatibility. They were quite neutral towards each other, no apparent problems although when she tried to lick him he didn’t look too impressed! We made the decision to adopt there and then & having completed the paperwork she was ours.

We knew it would take time & patience to welcome this abandoned puppy into our home, so we tried to slowly introduce them and avoid any confrontation. At first all seemed OK, both dogs were accepting of each other & played in the garden. However, there soon started to be an element of jealously, Clara was obviously desperate for our affection and tried to push Jackson out of the way and growled at him when he came near us or wanted to sit on our laps. Bedtime was a struggle over who was top dog and we had to separate them.

The next day it all escalated, they attacked each other over their food bowls even though we had fed them separately, they totally locked onto each other and we had difficult prising them apart. Jackson bit Clara’s ear and she bit his lip, they drew blood, really got quite nasty. There were subsequent fights over and at one point it took a dousing with a bucket of water to separate them!  During those first few days it was so upsetting to see them both so hostile towards each other. We were even having doubts that the adoption was ever going to work but were determined not to give up.

The team at the SPA were really supportive and on hand with good advice &, advising us how to look for & remove any “triggers”. Another piece of good advice was to encourage positive behaviours to make them a “team” such as walking them side by side & doing basic training together.

From a health point of view, Clara’s stitches became infected and on closer examination our vet also noticed that she had a lump (trauma) at the base of her rib cage, probably from being hit or kicked. We were asked to monitor it & thankfully it disappeared within a few weeks.

Clara didn’t arrive without issues.  She is still a little nervous, suffers from separation anxiety (we are careful not to leave her on her own for very long) has problems with toilet training – never mind she is now nearly two years old it has been totally back to basics! Car journeys & general socialisation with other dogs off lead was also an initial problem. BUT nothing is insurmountable and a bit of love & patience goes a long way!

So here we are 6 months on, with our new family, Clara is such a sweet affectionate dog who just wants to be loved & cuddled. She wakes us up every morning with big licks and loves to have her tummy rubbed! We’ve had a fabulous summer together , both dogs are now best of friends and absolutely inseparable and it’s lovely to see how their body language mirrors each other when they are playing or sleeping. Jackson is so happy with his new “petite copine” and now we can’t imagine life without Clara, our beautiful rescue puppy who never stops smiling!

2014-12-11
Jane Hartley
Previous: Adoptions of Leika and Rox
Next: Departure of DJ. But two arrivals.