Home / Latest News / Daisy leaves as do three other dogs!

Daisy leaves as do three other dogs!

Today was a busy one at the ScPA and in this case it means lots of adoptions. Four, in fact, which is wonderful news. Especially for the dogs in question, but also for their new families. After all, what is more exciting than having a new dog?

I am sure that thanks to yesterday’s blog you all knew that Daisy would be leaving today. As you know, this little girl arrived pregnant with five pups, and has done an amazing job of bringing them up. Well, she had more than a little bit of help from foster mum extraordinaire, Cyndy, who has loved and looked after Daisy and her pups, finding each and every one a wonderful home. Daisy has had perhaps the best luck of all, as she has gone to live with Muriel, whom we here at DRC know well. She has been a supporter of the association since the beginning and is also a personal friend of both Moira and me. And we have very good taste in friends!

Here is Muriel and her mum together with Daisy. There will be lots of news, naturally, and we know that Daisy will be adored. Muriel has been looking for a dog like this for a very long time, and we are delighted that she finally has her dream dog, and that she came to the ScPA to get her. 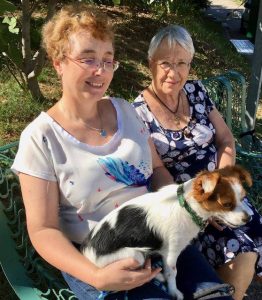 News of three other leavers is just as wonderful!

Little Sharpei cross Plume has a new home, after just a week or so. She was brought in by her family for rehoming due to her not being good with poultry. She is a gorgeous, affectionate and socialised dog and it was clear that she would not have long to wait for a new family. We are assured that her new home is feather-free; apart from Plume herself, that is! 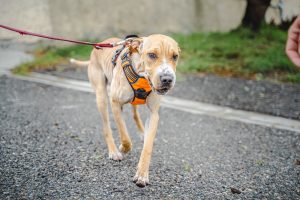 Next off was Muse, one of several beautiful breton spaniel crosses at the refuge. Muse arrived with her brother (we assume) Pegasus, in mid July. As usual the female has found a home first, but Pegasus is just as stunning and we are hopeful that he too will find a home soon. It must be hard for him to see his sister leave, but such is the fate of many “couples” who arrive at refuges the world over. 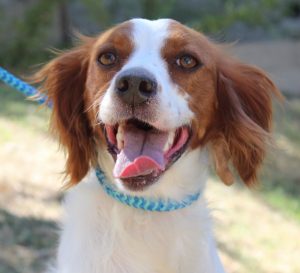 Today also saw the adoption of DRC’s current urgent appeal, Ben. This is particularly good news, as he, like Pegasus, saw his siblings leave before him. What’s more he was adopted soon thereafter and brought back 24 hours later as the family cat was not pleased. It is a shame that some dogs are not given any time to settle in, as quite often a bit of patience is required at the beginning. However today Ben’s turn came again and he may be better off with his new family.

His new mum is delighted with her new boy, as well she should be; Ben is a lovely young lad. DRC has duly updated its urgent appeal and we now have our fingers crossed for Jax. 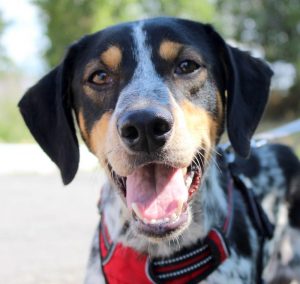 Many thanks to her and to all of the day’s other adopters. Days like this gladden the hearts of staff and volunteers. And the week hasn’t even finished yet! What will Sunday bring?

2019-09-28
Darcey Dyson
Previous: Adoptions of Soda and Pablo
Next: Adoption of Moon and Ruben