Home / Latest News / Dogs in War. Lest we Forget.

Dogs in War. Lest we Forget.

The SPA was closed today as it was a Bank Holiday; however a few volunteers sneaked in to spend some time with the dogs. Seems a shame to waste such glorious weather.

I approve totally of the fact that November 11th is commemorated by a national holiday in France (and many other countries, although sadly not in Britain). However taking time to visit the dogs at the SPA seems very appropriate, when you consider the important role played by dogs in warfare.

Britain alone trained some 20,000 dogs for military service. The dog’s innate qualities of intelligence and devotion have been valued and used by the forces in conflicts throughout the world. Among their many duties in WW1, these faithful animals ran messages, laid telegraph wires, detected mines, dug out bomb victims and acted as guard or patrol dogs.

Strong dogs such as mastiffs and rottweilers were used to pull guns and heavy machinery and small feisty terriers helped to keep the trenches clear of rats and other vermin. For men trapped in the horrors of trench warfare, a dog was a psychological comfort that took away, if only for a short time, the horrors they lived through. For many soldiers, a dog must have reminded them of home comforts.

It is not by accident that dogs are called man’s best friend. They follow their owners through thick and thin and are still used by the military today. Of course many other animals went to war too, and Britain has a memorial in Hyde Park so people can pay tribute. I hope there were lots of wreaths placed there today.

Business as usual tomorrow; now you have even more reason to adopt a dog (they are HEROES!) Why not come along to the SPA and say hello. Whether you are after a ratter or a rottie, we will have what you are after! 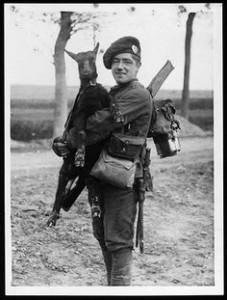 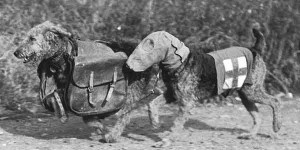 And a messenger dog 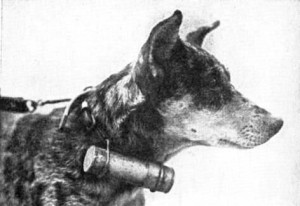 2014-11-11
Darcey Dyson
Previous: Puppies are reclaimed and some happy pictures arrive!
Next: A Very Welcome Donation and Metro Goes Home!