Posted by: Jane Hartley in Life After The Refuge January 5, 2016 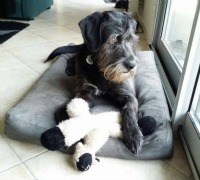 It’s almost a year now since I adopted Echo and I thought I would let you have an update. Echo (also known as Doggy-Poo) has turned out to be an easy-going, well-behaved hound. “Hound” gives the clue to one problem area: recall. Though he makes no effort to escape, Echo is an opportunist and, once free to run, that’s what he does. He has (so far), always come back, sometimes after 10 minutes sometimes after four hours. Moira and DRC’s consultant trainer, Sharon, gave advice and reassurance. However, the problem remains that I have a hound with unreliable recall, who needs to run and a garden too small to meet that need. Echo’s fearfulness of strangers, crowds, noise and dominant male dogs is less severe than it used to be and building his confidence in other contexts (e.g. play and exercise), is helping to make him less fearful generally Echo recently visited a dog behaviourist, who concluded that he is a dog who needs to run long distances at high speed (I already knew that) and, if he has other dogs to run with, he will tend to stay with them rather than disappear over the horizon (I didn’t know that). He thought I shouldn’t treat this as a major problem and advocated a degree of risk-taking. Unfortunately, I can’t adopt another dog or two as lures. However, the more I allow Echo to run off lead, the better his recall is becoming and the more he chooses to stay closer to me, rather than running off out of sight and coming back when he feels ready to. This flies in the face of the usual recommendations not to allow a dog off lead until it has a solid recall. However, the alternative is to keep him a miserable prisoner until he’s too old to run. His recall on a 10 metre line has been close to 100% for ages, it just disappears when the line is unclipped. I now let him run freely somewhere fairly safe, like at the sports ground or on an open mountain top, but far enough from home so he’s not over-confident about finding his own way home after a 1 to 4 hour escapade. I try to do this most days and Echo is getting the idea that I allow him to run and meet other dogs, give him treats when he returns and then let him carry on running. Then, when I finally put him back on the lead, we go home and he gets his meal. We also do a circuit by the river, where he can scamper up and down the rocks and drink river water. I really enjoy watching him stretch out to race and his speed suggests there’s some whippet in the mix. I still worry when I watch a happy dog racing away from me, but it’s lovely to see a little black speck appear on the horizon and resolve itself into a happy dog racing back to me. Unfortunately, when he knows the walk is coming to an end, Echo disappears to chase cats in the nearby streets. I now know where his favourite cat lives, so I can go and collect him. Another achievement has been demonstrating that even a seven-year-old hound can learn to play. At first, he hadn’t a clue about playing with toys. He gets some of his meals in food-dispensing toys, to stop him eating too fast, and has developed new skills in manipulating, swiping and throwing them around using his paws and snout. He now loves playing with fluffy, squeaky toys and is even learning to retrieve a squeaky ball, though that only interests him in the garden. Perhaps he will eventually run to fetch a ball or frisbee elsewhere too. Santa Claus brought Echo an activity game, where he has to slide covers, open covers using levers etc. to get the hidden treats. This is now a favourite. He is gradually accumulating quite a lot of toys. Echo used to pull like a tractor on the lead, making alarming choking noises and might, in the past, have damaged his throat by pulling on a collar, so I started using a training harness and double-ended lead instead. Having two points of attachment confused him over which way to lean and so he had to balance himself. I also stopped or turned around each time he pulled. Now he trots nicely beside me on the lead. This did take quite a lot of time and effort to achieve. Particularly when adopting a mixed-breed, adult dog, you have to be prepared to find out about them gradually and not have too many pre-conceived ideas about the exact character of dog you want, but be prepared to accept the dog you adopted and put some effort into training and behaviour shaping, while being ready for things to change unexpectedly (e.g. Echo has now found his voice and barks and bays more than he used to, though not excessively). Some things were essential to me, like getting a dog that was house-trained and didn’t pull too hard on the lead (I have arthritis, so wanted a dog with max. 20 kg pulling power). The recall problem is manageable because, though I only have a small garden, I’m semi-retired and work from home and have suitable places for Echo to run fairly close by. If he had chewed and damaged furniture etc. that would have meant containment in non-vulnerable areas and training. I’m sure Echo would have been happier had he been adopted by someone with a large, enclosed garden/park and a couple of other dogs to play with. Fortunately, he isn’t capable of thinking about that and accepts life as it is. He seems happy and I am too. Yes, I’ve sometimes regretted not having got a golden retriever or a labrador, rather than a hound, but that only lasted until Echo returned from his latest escapade.