Posted by: Jane Hartley in Life After The Refuge March 2, 2015 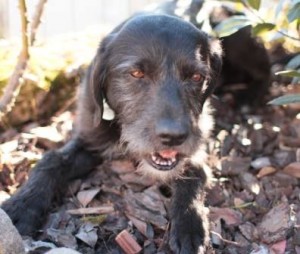 In December 2014, I went to SPA Carcassonne looking for a medium-sized, 3 to 7-year-old, easy-going, low maintenance dog that would get on with my neighbours’ griffon fauve de Bretagne, Gaspard, possibly a griffon cross or Brittany spaniel. Though he wasn’t on my list of candidate dogs. I was introduced first to Echo, but he was very shy, reluctant to meet me and, though he was a black griffon cross of the right size and body type, I wanted to get on and see the dogs I’d picked from the website. However, none of them appealed to me; they were either too big, overweight (I like slim, wiry dogs), too bouncy, young or not housetrained. I was attracted to a lovely black labrador, who seemed determined to make eye contact, but was told he didn’t get on with other male dogs. I asked to have another look at Echo. On the website, he was described as a “good-looking”, griffon-cross, the photo showed schnauzer-type face furnishings, which I didn’t like much and a mad look in his eyes. In fact, he had lost all his face furnishings except a straggly beard (possibly through stress), had a goofy look because of his undershot jaw and just looked like a slightly ridiculous black mutt, which I did find quite appealing. We went for a walk, Echo’s tail went up from between his legs and even gave a little wag and when we came back I asked to reserve him.

A couple of weeks later, I took him home. When introduced to his dog bed with fitted sofa-type cushion (chosen because it can be easily washed), Echo plunged nose-first into it, snuggling and wriggling into every conceivable position a dog could be comfortable in. His evident love of comfort made me think of the other dogs facing a cold winter on the concrete floors of their boxes and wish I could manage more than one dog.

I was completely ignorant about French scent hounds, except for the neighbours’ dog. I’d previously had a miniature poodle as a child and, later, a pointer cross acquired as a tiny puppy. A seven-year-old rescue dog of a totally different type was a leap in the dark. I was delighted to find I had adopted an affable, self-contained dog who is totally housetrained and has a minimal amount of basic training (sit, stay, go to bed and sitting for his lead to be put on), doesn’t jump up and lick people, doesn’t chew things he shouldn’t, who rarely barks or growls and never whines, but does bark when he hears a stranger approaching the house. He seems content to be alone downstairs or in the garden while I am working in my office upstairs, loves going for walks and for trips in the car. The house is on the side of a small mountain and Echo’s favourite place in the garden is the corner, overlooking a neighbouring garden, where a cat suns itself on the letterbox, and the street 15 metres below.

Initial power struggles over sitting on the sofa have now been resolved: no he can’t. On the negative side, he’s not terribly bright when it comes to training and cannot be trusted off lead. Echo seems to have been mistreated in the past, he was terrified (now downgraded to scared) of new people, especially men, crowded places and noise. He cowered, clearly expecting to be hit when a friend made a gesture, raising her arm. Gradually he is getting more confident and more affectionate, especially since I established myself as pack leader by not letting him walk ahead of me or eat before I do. Those last two changes seem to have made him less stressed and he has begun to walk through town with his tail in the air, rather than between his legs. The fur is growing back on his snout, which had become rather bald on top and his ridiculous eyebrows and moustache (which I’ve only seen in a picture from last summer), show signs of sprouting anew. 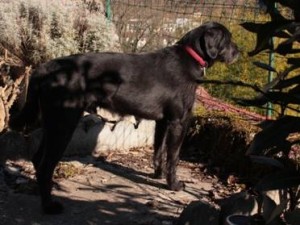 About a week after coming to live with me, returning from a long walk, Echo did a little play bow and intimated that he’d like to walk off lead like Gaspard. Foolishly, thinking he just wanted to get home and have his delayed breakfast, I let him off the lead. He shot away up the lane and past the house. I followed calling him; he came halfway back and then rocketed up the path that leads to the top of the mountain. I followed and saw him sniffing something interesting about 200 m ahead of me. I called him; he looked and ran off up the path and out of sight. A couple of minutes later, he came flying down towards me at about 50 km an hour and carried on past for 100 m, turned again and rocketed up past me and up another path into the trees. I stayed still, calling him from time to time and eventually he came back just long enough to wolf down some treats and be caught.

A few days later I let him off the lead somewhere a bit safer, where he was less likely to get out of sight. After about 2 km of high-powered running around, he came back and was suitably rewarded, (in spite of the times he’d been called and hadn’t come back). Thinking he must be tired, and as he showed an inclination, when we got home, to explore up the mountain again, I let him off the lead. He disappeared out of sight before I could blink and calling produced no results. Eventually, just as I thought that I would simply have to go home and wait for him to come back, he came tearing back, closely followed by a large off-lead husky, and let me clip his lead on in return for a treat and hiding behind me. Fortunately the husky turned out to be friendly.

There was another incident soon after, when Echo wriggled past me before I could put his lead on for our evening walk. He disappeared up the mountain behind the house. I called him for about 10 minutes, then went back indoors. The heavy rain forecast for the next three days soon started. I phoned Moira from the SPA and followed her advice to leave the back gate and the downstairs shutters open and the lights on outside. Hours passed and there was no sign of Echo. I started to think he was gone for good and felt really sad looking at his empty dog bed. I stayed up working upstairs, but came down for a last check at midnight. A soaking wet, miserable hound was shivering outside the patio door, silently staring in. Having been towelled down and blowdried, he hid behind the furniture, expecting to be punished. Since that night, he seems to realise that he will not get hit for being a naughty dog and is more affectionate. I have bought a 10 m lead for recall training, but don’t know whether he will ever have a reliable recall.

One morning, coming back up the lane from the market with my hands full of shopping, Echo (who was on the lead) plunged his head into the ivy hanging down a wall and emerged with a struggling black and white cat in his jaws. I shrieked and slapped him and the cat managed to get away, leaving a large chunk of what happily turned out just to be fur in Echo’s mouth and a look of mixed triumph and disappointment on his face! I reminded myself that he’s a hound and hounds are bred to hunt, so it’s not his fault. He seemed very puzzled at my negative reaction.

There are very big advantages with adopting an older dog as they are calmer and less demanding than a puppy or a youngster and still trainable. A small or medium-sized seven-year-old dog is only middle-aged. You don’t have to guess what the dog will look like or how big it will be when it grows up and you can see its basic character. Though the effects of any past mistreatment or lack of early socialisation may never completely disappear, that applies to younger dogs too. I’m really pleased with Echo’s progress over the past month and sure that he will continue to become more confident and learn new things.

2015-03-02
Jane Hartley
Previous: Neuter and Spay…The Only Way!
Next: Three new arrivals but a puppy is adopted and Goonis finally finds a home!