Home / Life After The Refuge / Everybody loves to be rescued

Everybody loves to be rescued 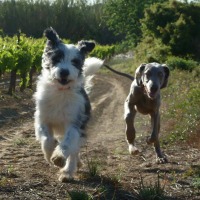 We wanted to write this note for several reasons

1. to thank the wonderful folks that care for the animals at Carcassonne SPA

2. to admit that adopting a dog can be hard work

3. to explain how glad we are that we did

We are a couple in our 40s living in a spacious French house surrounded by the wonderful Languedoc countryside.  Neither of us would describe ourselves as “dog-obsessed” – but we did love one particular dog, a Weimaraner who died in January (very suddenly aged almost 9) from bloat.  The big empty space he left in our lives was ghastly.  Life just wasn’t the same without those extra feet.

In the first instance we had no plans to get another dog and we donated his food and treats to the SPA and thought perhaps we might see a new 4-legged friend to bring home.  I liked a young spaniel cross but my partner just couldn’t feel a bond and we returned to our large empty dog-less space empty-handed.  Anyone who has owned a pedigree will know how attached and familiar you can become to the traits of a particular breed.  So at the end of February a new Weim pup entered our lives but we continued to check the SPA Facebook page on a daily basis “just in case”.  We had talked many times about having 2 dogs and now we had the chance to make it happen.

4 weeks later we spotted a shaggy black and white dog (named Vania by the staff) on the Facebook page – about a year old, with hardly information about her past.  I was passing through Carcassonne and called in to see her just after receiving the devastating news my mother had just died.  As fate had it, that small(ish) scruffy mutt happened to be on a walk as I walked in, she sat calmly on my foot almost as if she knew I had come specially to see her and would one day take her to her forever home.

My partner later visited the SPA and took Vania for a couple of short walks while I was away, and it was rapidly decided we wanted to bring her home – but there were complications in adopting a rescue dog so soon.  We could not do it whilst having a young (not fully inoculated) pup at home.  So we found a friend that “might” take her for some of the time but only on the condition the dog was flea-free and child-friendly.

All these circumstances were definitely not straightforward but thanks to an amazing network of “SPA helpers” a lovely foster family agreed to take Vania for an extra fortnight to help us out.  During this period they fed, walked and wormed her (she was riddled with them), and took the time to update us on how she was adapting to a home life beyond bars.  Vania then went to stay with our friend round the corner so we could introduce her to our pup on neutral ground – which as it turns out was barely necessary.  “Mattie” as we have named her, played and snuggled up with our pup straightaway and has done so to this day.

What we had not bargained on, was waking up (for what seemed like weeks) to a shaggy unknown dog covered in its own diarrhoea and a shoe-chewer terrified of most men, hair brushes or people coming downstairs.   A new set of challenges presented themselves.  We are still working on the hair brush phobia, but the other issues have largely been resolved by plenty of cuddles and exercise, some very basic training, along with a change of diet and a lot of socialisation with people and other dogs.    Mattie has been such a hit that we have even been offered money to take her off our hands!    She grows more confident in her surroundings by the day, is boisterously playful but still rather unpredictable and there are very occasional toilet-training accidents indoors.  Her history is a mystery so we just don’t know why she reacts to certain things the way she does.  It’s taken 8 months of adjustment and the learning curve is continual although certainly not as steep.

To anyone that has lost a special dog, or is considering a new adoption, we’d never say it’s easy, comparisons will be made, what works for one dog probably won’t for another.   But the foster families, the follow-up advice from the SPA, a lot of patience and industrial amounts of kitchen roll have helped us along the way.  Mattie now seems to “smile” her way through life – she’s great fun, very entertaining and incredibly affectionate. She has definitely found a place in our hearts and we can’t imagine her living with anyone else.

Our friends say they’d like to find a dog as lovely as Mattie, and we just say go and see the dogs at Carcassonne SPA!

As a side note, Mattie’s influence on the Weimaraner is interesting. He started out as quite a handful, very confident and potentially dominant. After several months play-fighting with Mattie, he is very funny, very cuddly and sociable with anyone, no matter how many legs they have. She has taught him a lot, and in return she is picking up basic obedience by watching him – so both characters are balancing each other well and we feel lucky to have two such lovely dogs.