Tonight’s story will make everyone smile!

I am sure you remember Shadow and Dreyfus who were adopted by Nikki and Dave. Shadow was adopted just over two years ago and Dreyfus about a year ago.

When I took Dreyfus over to Pau to meet Nikki she told me about her previous dogs and one who was called Hector, a lovely border terrier who had simply disappeared. In fact, she donated his doggy coats to the refuge!

Well today, two and a half years after going missing, Hector appeared on their walk! He still has the same collar and has obviously been very well fed wherever hes been. He recognised Nikki right away and seemed delighted to be back.

I can only imagine Nikki and Daves delight tonight..they simply cannot believe their luck! Shadow and Dreyfus seem quite happy with their new ‘brother’.

Hector was of course microchipped and yes Nikki tried really hard to find him. Also, you don’t see many border terriers in France! So, I guess someone found him and never checked to see if he was identified. I wonder how he found his way back and if all of this time hes been local…who knows but tonight we have one happy family! What a happy ending!

If you do find a dog who appears to be lost please always take the dog to a vet to check for identification. Its not a case of finders keepers with animals…anyone can lose a dog, that’s why identification is so important!

Tomorrow we will hear about two great adoptions, an oldie and a puppy! 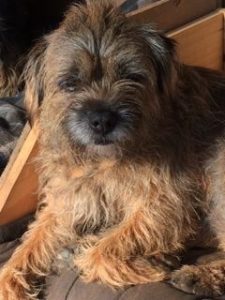