So what could possibly happen on a Sunday when the refuge is not having its monthly open day? The departure of five more dogs, that is what!

Of course you remember the appeal that we made for transportation fees for five lucky dogs who have been chosen to go to a fabulous association in the UK. Well, today was the day. Or perhaps better put last night was the night. Or was it morning? In any case, it was a time when most normal people are asleep. But we are not normal!

All five dogs were loaded up, after papers and microchips had been checked, and we waved goodbye to Charley, Kiko, Galileo, Hood and Mix. We had already had news that all is going well, and with a three man team of drivers, the dogs will be walked every three hours until they arrive at their destination in South East England.

I would like to thank Moira particularly for all her organisation, including visiting the association to chat to them about our dogs and to make sure they had the same basic principles as us (ie no euthanasia and (something that we would love to provide but are unable to), luxury living quarters). Also to Moira (again), Dominique, Viv and Roy for getting up so early (or staying up so late in the case of the guys!). Thanks also to Carole and the SPA employees for making sure all the paperwork was sorted out, and to yesterday’s volunteers, who made sure every dog got a nice long walk before moving to the top kennels to make it easy for us to load them up in the pitch dark this morning.

I am so pleased for all the dogs. It is the opportunity of a lifetime for them, a new country and an association a bit like our great friends at Animal Trust; plenty of walks, house-training and obedience training and an average waiting period pre-adoption of just three weeks.

I wonder who will be the first to leave….

Let us not forget that it was thanks to the recently departed Jim that we were given a route into this well respected association, and the adoption of each of them will be homage to this gentle man who loved animals so much.  I am certain he would be delighted to know that all went well and thanks to him, five dogs are on their way to a better life.

Thanks to everyone who donated towards the travel costs, too. You have been amazingly generous, as ever. The appeal continues, by the way, as transporting the dogs was not cheap. However we wanted them to arrive safely and at a time that suited everyone. I can’t say we were happy about the middle of the night pick up, but in the overall scheme of things, it means little. Early bed for me tonight, though!

Moira and Dominique have a final look at our lucky five, before wagons roll! 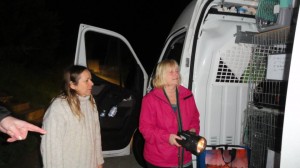