Four adoptions on a fine Saturday.

We had four adoptions to end the week.

First to leave was Gringo, a tiny pinsher who had spent time at the SPA on at least two occasions, including once when he gate-crashed a meeting of the SPA Board in the centre of town. This time, however his owner did not come to collect him and we were able to find a better home for this little lad. His new family fell in love with him instantly and we are sure that a wonderful life awaits. 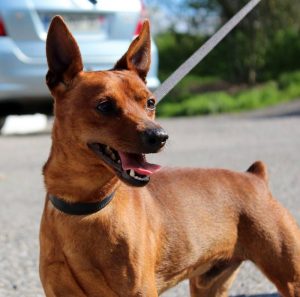 We next said farewell to Mirza. She was abandoned earlier this month along with her puppy Tonnerre, who has already been adopted. Mirza is a fabulous dog with a CV to match. And when a young gentleman came looking for a calm, houstrained dog to share his life, we would have suggested Mirza, even had he not already spotted her on the website! They went off for a walk, and of course Mirza was as impeccably behaved as usual and off she went to share long walks and love with her new owner. 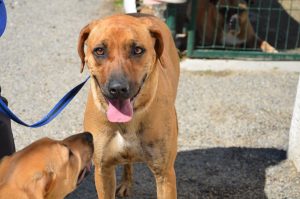 Amber was homed today, as well. In fact it was definitely her day, as there were several different families interested in her. And that is no surprise to anyone who had met this lovely calm little terrier. Why she was not snapped up sooner is the only surprise. Her son Arnold left several days ago, and Amber cried….But now all is well, she has gone to live with a woman who runs a gite business and so pretty little Amber will never be alone. 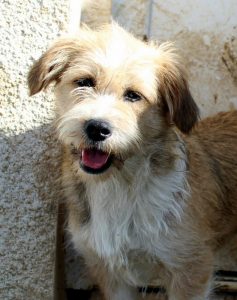 Today was also the turn of little Polly. She arrived ten days ago, the same time as Cooper a very elderly jack russell, who was reclaimed soon afterwards. There is no mystery as to why they arrived together…Polly was on heat and Cooper did what came naturally to an uncastrated male…chercher la femme.

No one came looking for Polly, though, and as she is tiny, female and young, it is unsurprising that she should have found a new home so quickly. Today she went to the vet to be sterilised, and then it was straight to her new family. 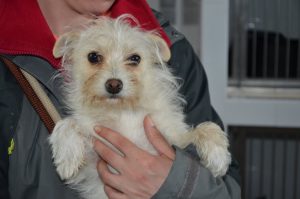 So the week ended better than it began, and we have a some lovely news already lined up for Monday.

2018-04-21
Darcey Dyson
Previous: An adoption, a grand day out and an anniversary
Next: Three lucky leavers