Home / Latest News / Four Great Adoptions, including that of Patty!

Four Great Adoptions, including that of Patty!

The week got off to a slow start, but today has made up for it, with four fabulous adoptions.

First to leave was puppy Pocket. This little lad was brought in for rehoming (I don’t know why, but as he was only 3 months old at the time, perhaps ignorance is bliss) not quite ten days ago, and finding his new family has been difficult. Not because no one wanted him, rather the reverse. This adorable puppy is going to be HUGE, but it seems there is no end of people looking for large breed pups. Inevitably some people are disappointed; there were several really wonderful families offering him a home. I am so glad it wasn’t up to me to choose.

In any case, we are sure that Pocket is going to be very happy, and we are sure to get news. Perhaps we should start a sweepstake on what will be his weight when he is fully grown! 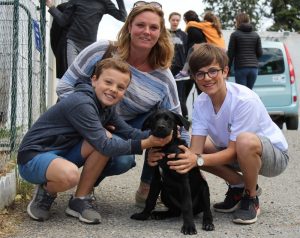 Next we said goodbye to six year old Lady. She has been with us since the end of January, and has gone off to live in Switzerland. Her new family have had staffies before, and were attracted to Lady due to her looks. But even better, she is not categorised, and so can live in complete freedom, be it in her new country or with her new owners when they holiday in France. She is a very lucky girl, and she seemed to know it as she left today with a huge smile on her face. 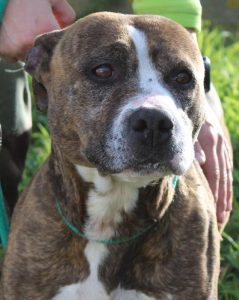 Next up was Nuts. Sometimes on DRC we speak of “invisible dogs”. They are the ones who arrive and whom no one seems to notice. Nuts was not quite 18 months old when she was brought in for rehoming in October 2018 for not being good with cats. That was a whole 7 months ago, and today was the first time there has been any serious interest in her. But one is all it takes if it is the right one!

Nuts’s new family are a young and sporty couple who are going to offer her everything she needs. They run regularly and love dogs, and best of all, they have no cats. We are delighted for Nuts; it has been a long wait, but it was worth it. 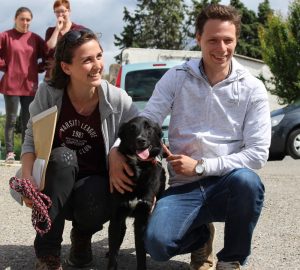 And on the subject of long waits and invisible dogs, guess who was adopted today? Patty! She has been at the ScPA since July 2016. That is just short of THREE YEARS! She arrived with a beautiful brindle coloured malinois cross, who was adopted very quickly. But poor Patty (black and a shepherd mix) has been waiting ever since. And until earlier this week, I don’t believe there has been a single enquiry about her.

On Tuesday, however, her luck changed. A young couple arrived looking for a canine companion, and Patty caught their eye. Once they found out how long she had been at the refuge they were amazed! Patty has quite a strong character, but this is nothing new to them; they have had difficult dogs in the past, apparently.

Today Patty’s long wait was over. Patty will be 6 in September, so half her life has been at the ScPA. She seemed more than ready to leave, however, as she jumped straight into the car for her new life. Let’s hope all goes well for her, and that she doesn’t miss her pal Tyson too much; they have shared for a long time, now.

Thanks to everyone who has walked her during her time at the ScPA. She is a great favourite with anyone who likes a hand up the steep hill! 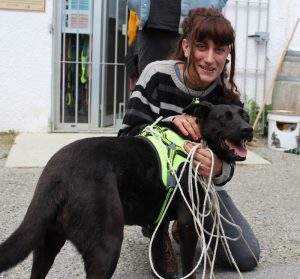 Three other recently arrived dogs were reclaimed, and so it has been a wonderful day. And the week is not over yet!