Today it was raining. Or more exactly today it was raining some of the time. In fact it was as we Brits say, if you don’t like the weather, wait five minutes! Some lucky dogs were walked but, you guessed it, the walkers were hardy Brits!

No dogs arrived and one lucky girl, Farrah, was adopted. This little dog arrived just before the New Year along with her sister, and it was clear from the word go that Farrah would find a home very quickly. Her adopter contacted us via Facebook about saving a dog who would otherwise probably never find a home. However once she had seen Farrah she was hooked.  It is a shame for the other dogs for whom this could have been a lifeline, but the heart goes where the heart goes, as they say. And whereas several volunteers were disappointed that the adopters desire to “ save a dog” crumbled at the sight of a dog whom we could have homed fifty times over, we are not there to force people’s hand, and we just have to accept the wishes of the adopter.

Farrah was sterilised today and has now gone off to her new home. Her sister Vienna is still waiting, but it shouldn’t be too long before she is in the warm, too. She has the same character as her sister, just as affectionate and calm.

Come and meet her, she will steal your heart, in the same way that her sister stole her new owner’s heart! 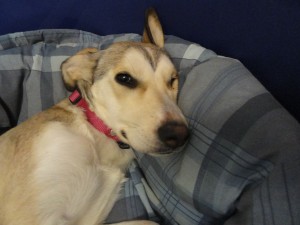 And her sister Vienna who is waiting for a home. 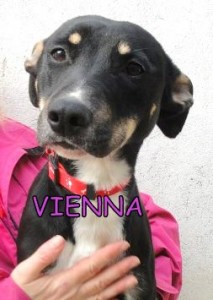