From Scrapheap to Safety

Some dogs are born survivors, and one of those left today. Who remembers the litter that was found on the rubbish heap just before Christmas? Little Angel died the same day, and sadly her brother Nestlé survived for two weeks before also succumbing to the illnesses picked up during those oh so important first weeks of a puppy’s life. Puppies really do need their mother’s milk and manmade substitutes are just not the same. This will be the subject of another blog, but for now let’s talk about Praliné.

Of the two puppies who survived, Praliné was the second to be reserved, and in fact his reservation took place on the open day at the start of the month. We were keen to make sure that he and his brother Cocoa (soon to be renamed Kobi) were fit and strong before leaving. The loss of Angel and Nestlé hit us hard and we didn’t want to cause that kind of sorrow to a family. Today Praliné was given a clean bill of health and off he went.His brother will be following shortly.

Of course two out of four is not a great success rate, but if you look at the start in  life for this litter, perhaps it is a miracle that any survived.

The day’s other departure was that of Laika, aka Fetide. Several  people, both French and English, have asked about her name. Basically when she arrived she STANK. At first we thought she was ill, but it seems that she was just suffering the after-effects of a nasty meal (she had been straying, so probably did not choose to eat rancid pigeon, or whatever it was). In any case, this is why she was called Fetide (who is actually the character Uncle Fester from the French version of the Addams family).

After protests from some volunteers and following a suggestion by her godmother, we renamed her Laika, and personally I don’t think it is a coincidence that following this rebaptising, people started to ask questions about this beautiful six year old setter. Today she left with a foster family who are looking after her for their friends, who are adopting Laika officially next week. No point in keeping her in the SPA when a warm home is available! 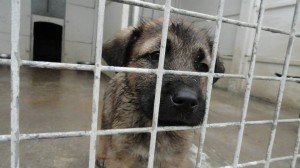 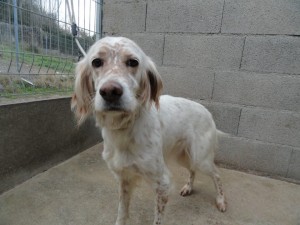