The refuge was shut today, as it was Pentecost. This means that apart from the staff cleaning, feeding and giving medicines in the morning, the dogs were on their own. Maybe just as well bearing in mind how hot it was today! Any volunteers coming to walk dogs from now on are well advised to bring water and hats, as it is pretty exposed countryside, and we don’t want any sunburn casualties!

On the subject of sunburn, two of our dedicated volunteers, Di and Fred, did separate Vide Greniers in their respective villages yesterday. Di says she looks like a beetroot, but I am sure she has cooled down by now. In any case, despite the searing heat, which affected the number of visitors, a total of over €150 was raised, which is great. We have lots of new fundraising ideas following our team meeting last week, and for some of them some “seed money” is required, so this could be enough to get us going.

I usually use “quiet days” to show pictures of former SPA dogs in their new homes, and as luck would have it, we received a perfect picture yesterday. Here is Maddie (ex Malaga) who was adopted in September 2013 by our great supporter Elinor. She lives in Bonnie Scotland where she is having a life that many dogs can only dream of.

Yesterday Maddie took part in the Mugdock family dog show, and she won first prize in her class. Apparently the judges adored her. It is true that they probably don’t see many examples of this breed (a griffon blue de Gascogne), and Maddie attracted a lot of attention. Especially when she decided to sit on top of a staffie as the grass was too ticklish! Bear in mind that in the UK (and further to yesterday’s post) staffies are quite rightly regarded as perfect family pets (when in the right hands). This boy certainly showed the breed’s tolerant side!

Also further to yesterday’s post and the restrictions on the rehoming of so called “dangerous” dogs in France, should you decide to take the plunge, we are there to help you through all the paperwork. Please don’t be put off, we just wanted you to be aware.

Maybe some of you follow us on Twitter, where we now have over 1300 followers. Our tweets are done by Veronique, who is bilingual, so posts appear in both languages. We use our twitter feed to highlight the plight of certain dogs, or to publicise upcoming events, but also to link to other articles of interest to dog lovers.

Please follow us on @spacarcassonne. ( https://twitter.com/SPACarcassonne ) And please retweet for us. Help us build up our following which will help get more dogs and cats adopted and more money raised. 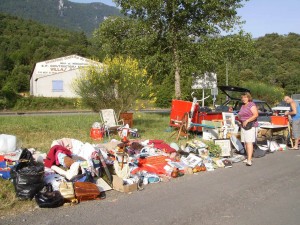 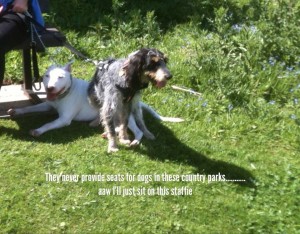 …..before winning her rosette. First prize, no less! 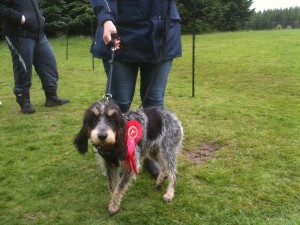