Today the refuge was extremely chaotic, however once the dust had settled we took stock, and in fact there had only been 2 new doggy arrivals. More information on them once we know whether they are with us to stay or whether their owners will come and get them; certainly not looking likely for the tiny girl who was found in an empty flat, three weeks after her owners moved out. Ho hum

There was a lovely adoption today, however, and again I must thank and congratulate the SPA employees and volunteers for the transformation that has taken place with this dog.

Galion was abandoned a the refuge in mid-March due to a house move (an all too common excuse). He was just terrified and had obviously never been socialised. We decided the best medicine would be to share his kennel with an outgoing dog, and here lovely gentle Casper helped out. Casper was adopted, and Galion found another kennel mate, as by now he was far more confident.

Just look at the photos of Galion when he arrived, cowering in his kennel, and on Saturday when he was out on a walk. Isn’t that amazing. The family who adopted him today will be very happy with their lively outgoing dog. He will have a far better life than his original owners would have given him. His three months at the refuge have helped him on his way, there is no doubt!

Oh, and I promised you photos of the little jack Russell who arrived yesterday, and they are certainly worth waiting for. She is teeny tiny and is very sweet and gentle. Good with other dogs, too! Her name is Vanilla and she is already a refuge favourite!

Galion when he arrived 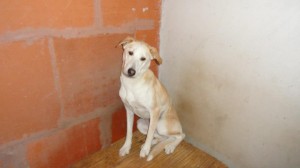 Galion when he left! Didn’t he (and we) do well! 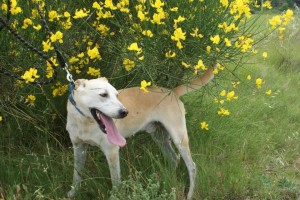 Vanilla; who can resist? 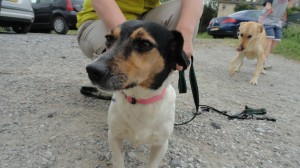