Home / Latest News / Getting ready to be Happy

Getting ready to be Happy

Response to the SPA makeover have been overwhelmingly positive, and our efforts were helped by regular heavy downpours of rain throughout the day. That should make all the plants settle in nicely (says she, trying to see the positive side, as usual).

A couple of things that I didn’t mention yesterday. Despite the fact that the refuge was closed, we did in fact have two new arrivals. First in the morning was Volt, a husky who belongs to the SPA neighbours and who is a regular visitor. He left with his owners (again) today. The second dog arrived in the afternoon, and we knew her, too. Zia had spent a long time at the refuge with her pal Luther, before being reunited with their owner. A young couple found Zia wandering and weren’t to know that she was close to her home, so brought her in to us.

In any case, it was lovely to see her again, and her owner came to collect her as soon as possible this afternoon, so no harm done!

We had one arrival today, a small and presumably young dark chocolate coloured lab cross who was found in (guess where…) LIMOUX! I knew a dog would be arriving from there, as last night I received a telephone call from a woman in Limoux to ask me if I could come and collect the dog, as the police municipal didn’t want to because it was a bank holiday. Well, it was a bank holiday in Carcassonne too, and at 19H30 I was trying to relax a bit after my afternoon at the refuge. Sigh.

In other news, we got a letter from the Mairie giving us permission for tomorrow’s Flash Mob event. Just to confirm, it is taking place at 11am (not 10am as in a previous blog) on Place Gambetta (not Place Carnot, also as in a previous blog). In my defence, it is not me organising the event! We also got a mention in today’s Independent, so there should be some people to watch us. Rosa is coming armed with face paints if anyone wants to join in the dance!

The SPA will have a small stand, with some publicity material and some donation boxes. Please come and support us!

Perhaps this video will inspire you!

Zia – Reclaimed (but it was lovely to see her again) 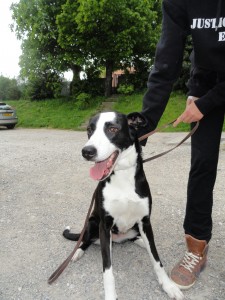 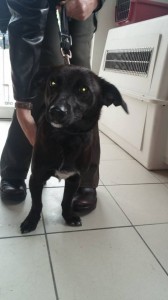 2014-05-02
Darcey Dyson
Previous: Spring makeover for the SPA
Next: Flashmob!