When I arrived at the refuge on Saturday the first thing I saw was a family sitting on a wall playing with a recently arrived  female, Zizouille. I gave her a cuddle then went to say hello to the staff and other volunteers (that tends to be the way it is at the SPA, dogs first!). Turns out the parents had been to search for a dog earlier in the week and, following Carole’s suggestion, came back to make sure that Zizouille was fine with their children.

Today was the end of this lovely young dog’s “pound time” (the legal delay we have to give an owner to come and reclaim their animal). So Zizouille was sterilised and off she went with her new family. One happy dog, and one delighted family!

The day’s other adoption was even better, as far as I am concerned. Folie arrived at the refuge in mid March and has been overlooked until today. Lots of people ask if we have puppies, and we have sent plenty of people to see this little girl, who was living with the cats. We wanted her to have her two vaccinations before moving to the outside cages. Today was the day when she joined the other dogs, and she had been sharing with Prosper for about half an hour when a family saw her and fell in love! Folie was already identified, so she left straight away. Fabulous!

So two dogs left, but in terms of puppies we effectively did a swap. Except I bet you have never seen a dog like this before. Born on March 1st, this little boy has been named Hamtaro, which is the equivalent of Hamster. We have no idea what at all he is; perhaps you can help us? In any case, he is just lovely, will be small-ish (but bigger than a hamster) and will definitely turn heads.

More painting and DIY took place and Marie-Pierre one of our volunteers brought us an olive tree. The sun shone and spirits were high. The refuge will look beautiful when we have finished our DIY (hey, that rhymes!) 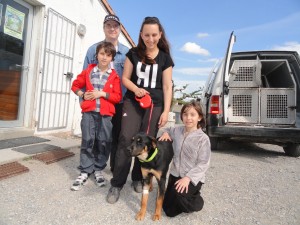 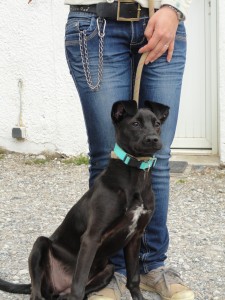 Hamtaro – new arrival (but what is he?) 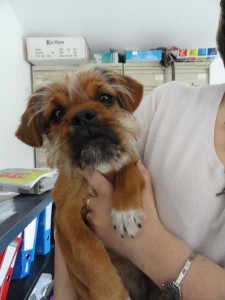 A lovely olive tree ready for planting (thanks Marie- Pierre) 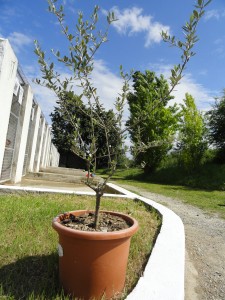