It is me, Darcey, back again after my work-related wanderings! Although it is a Monday and not one of my normal refuge days (not that any of them are “normal” per se), I had to pop in to the SPA to deal with some paperwork. Talk about good timing!

I was there just as Duffy was being adopted! I had time to give her a final cuddle, and I was not the only one who wanted to say goodbye to this lovely, gentle girl. She had been with us since the beginning of July, which isn’t very long, but we all loved her and could not understand why she had not found a home until now. So when a kindly gentleman came in saying that he wanted a female dog who was not in the first flush of youth, Sabrina thought of Duffy immediately. However he specified that the dog should be neither black nor white, so clever Sabrina asked if a mixture of the two would be okay!

Duffy fit the bill perfectly, and as she was already sterilised and micro-chipped, off she went!

Gromit, our beautiful young spaniel left for his new home too, and yet another lucky leaver today was Rocky, whose owner is ill, but has some friends who have taken Rocky home with them until he can go back to his real owner. This pint-sized German Shepherd cross had many admirers, but ultimately going back “home” is the best solution for him, so that is great news.

Going back to the real owners is not always the best option, and this was emphasised by the arrival of yet another of the Anatolian Shepherd puppies. They are all accounted for now. Five in the refuge, and three homed by the vets (and we hope they are good homes). The rest (apparently there was a litter of 11) died at birth. I refer back to Moira’s excellent article yesterday on sterilisation. Why oh why oh why…….However all the stray pups are now with us, safe and well-fed at the SPA; a situation they have never known in their lives. When they are fit and healthy they will be rehomed and their days of neglect and misery will be over for ever!

All in all a good day. Big happy smiles from me today! 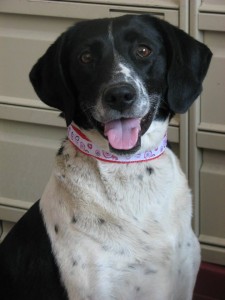 Gromit is adopted too 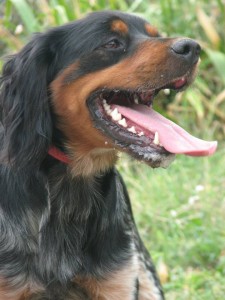 And Rocky goes to friends of his owners 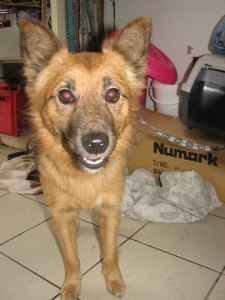 2013-10-14
Darcey Dyson
Previous: The Myths Of Sterilization
Next: A different kind of cuddle!