Today was a happy, sunny day, with a good team of volunteers walking, as well as some good news.

One of the other visitors who came on Sunday spent a long time sitting in front of one of the cages, obviously transfixed by the dog inside. I knew that the dog had already been reserved, and was hoping that I was not going to have to be the bearer of bad tidings. No, this was in fact the woman who had reserved the dog, and just wanted to look at her new pal, who was waiting for today to be sterilised.

So today Mafalda left, after just 2 weeks at the SPA. She is a fabulous looking dog. On the photos she looks big, because she looks like a pure bred German Shepherd. Only difference is that she is full adult size but weighs just 17kg! So cute! We are delighted that she has found a home so soon, especially as someone put her on chien-perdu as being lost, but when Carole called the owner she was very cross that we had tracked her down.  It wasn’t her that was looking for the dog, by all accounts!  Mafalda will surely be better off in her new home, where she is very much wanted.

There was another adoption today, that of little Truffaut, who was found on a recent bank holiday in the cinema at Limoux (hence his name). Today a family came to us straight from the vets, where they had just said a sad goodbye to their dog of 15 years, who had died of terminal cancer. They could not imagine life without a dog, and the vet suggested that they pop to the SPA. I didn’t know this when I took newly adopted Truffaut to the vets to be chipped less than an hour later! The vet was as delighted as I was. There is no right or wrong time or “suitable delay” after the death of a dog, it is very much how the people feel. I think it is wonderful that this family was able to open their hearts again so soon, although to be fair they steered clear of any SPA  dogs who looked like their recently departed friend.

More good news: Willy was reclaimed! His owner had not informed her (adult) son of her plans to abandon the dog,  and so he came in to take the dog home. He is the one who looks after the dog most of the time in any case!

And a lovely girl arrived but left straight away because (all together now) SHE WAS MICRO-CHIPPED! 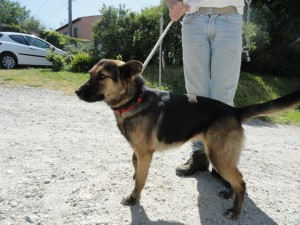 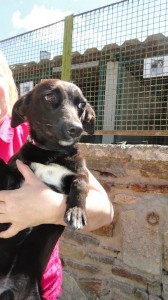 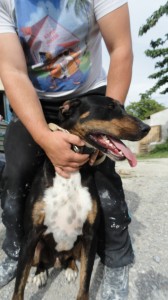 And a lovely girl leaves thanks to her microchip 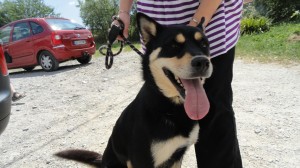 2014-06-03
Darcey Dyson
Previous: Arrivals, adoptees, and little jack finds his home.
Next: Fabergé And Calamity Jane Leave After Only Weeks At The Refuge!