Any adoption from the refuge is good news, but some are more so than others. And today I am over the moon at the departure of one of our most deserving dogs. Ladies and gentlemen, I am delighted to announce the adoption of Gouda. He arrived in January this year when he was just four months old. This is a bad age for a dog. No longer a puppy, but with no training and without the calmness of an older dog, his former owners had clearly decided that he was not right for them. Heaven forbid that they should take him to dog training school or make any attempt to educate him. Far easier to dump him and let him make his way to the refuge, if he wasn’t run over in the meantime, that is.

Our litters of puppies are often named according to a theme, and I have often joked that Gouda was the last of the puppies from the “Cheese litter”, but in fact he arrived alone, so there are no dogs out there called Emmental or Camembert, although it is an idea!

Gouda was adopted briefly (for one night) in March. He was intended as a present for someone’s parents, but the following day he was returned, as the parents had already “ordered” a dog from a breeder. I was heartbroken for Gouda, and he must have wondered what he had done wrong.

Four months further down the line and at the age of eleven months, he has been adopted again, and this time it looks good. The whole family came to meet their future dog, so now Gouda will be busy being spoilt by parents, children and grandchildren. I really hope they send us photos. We will have to find a new friend for Eclair, Gouda has been a very good kennel mate to this dog who arrived so nervous and is now far more confident.

But Eclair is still waiting 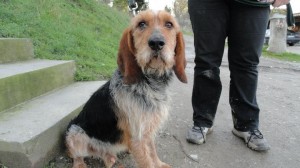 2013-07-29
Darcey Dyson
Previous: Some excellent long-distance news
Next: A Home For Harley!