Today one of my favourite boys was adopted. Grey or Mr Grey as I called him was adopted after 6 months at the refuge. When he arrived we all remarked how handsome he was and that he certainly had a bit of ‘bully’ in him but not enough to cause any concern at all. I am amazed that he wasn’t snapped up a lot quicker than he was as he had the most wonderful wiggly waggley body language. He was always delighted to get out of his kennel for a walk or a cuddle and he was a favourite with lots of the volunteers!

Next to leave was the very handsome Funky. Funky was a very large and impressive Beauceron who took his guarding duties seriously. Luckliy this young boy was definitely all bark and no bite and he proved to be a happy friendly boy who was fine with other dogs too.

Two more of our puppies were reserved so two more little girls will be leaving soon. A few weeks ago we blogged about the adoption of tiny Louizou, now Bambi. Her very clever young owner Maisie has decided to write a blog which will chart her puppyhood and keep us all updated on her progress. This is a great idea and we would love some more of our puppy parents to do the same. (http://bambigrowingup.blogspot.co.uk/)

Often people have no idea what to expect who they take home their new puppies. We all have had our ‘first’ pup and I know that when I look back on mine I cringe at some of the things that I allowed him to do and I thought was quite acceptable. We all learn as we go and I am sure that new puppy parents would love to read other puppy blogs.

So what are the first issues that most people encounter? Well the first one is of course housetraining. On the DRC facebook page we have help sheet and one of them is all about how to housetrain your pup. It is available on both English and French.  Just like toddlers some pups learn quicker than others and the main thing is to be consistent, supervise the pup, take it out often and be prepared for accidents!

Maisie is very lucky that Bambi sleeps during the night. Lots of young pups bladders are just not big enough so you need to make the choice of taking them out during the night or cleaning up in the morning. I usually put a young ups cage beside my bed and take then out when I hear them wake during the night. I don’t make a game of it, just out of the cage, onto the grass, back in the cage and lights out. This only lasts a few weeks until their bladder is big enough to hold on until morning.

We do of course offer advice to our puppy parents and all receive information on crate training, housetraining and preparing for puppies arrival.

We did have one arrival… Salambo. More information on him tomorrow! 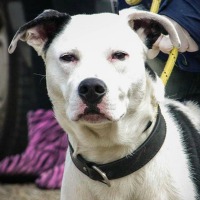 Funky was adopted too.. 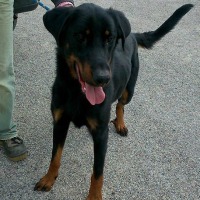 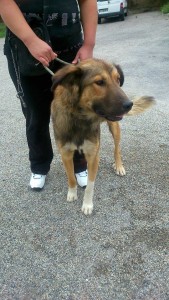