Grizzli, our enormous Newfoundland was adopted a few weeks ago but things just didn’t work out as the family had seven other dogs who Grizzli teased relentlessly.  This 3 year old has had no training or rules to follow and still thinks he is a puppy.Now although we all love playful dogs a 50kg out of control Newfie is really quite daunting!

Yesterday I had a call from a lady who lives in the country with her hubby, two other dogs, cats and donkeys and they were very interested in Grizzli. They were experienced with both Newfies and rescue dogs so in order to observe Grizzli’s behavior in situ it was agreed I would take him to their house this afternoon so we could test him with their animals.

I had a quick peek at the meteo and saw that today was going to be another scorcher and I know that Newfies do not do well in hot cars so I decided to be brave and actually reverse my car into the garage last night to make sure it was nice and cool. With the air-conditioning at full blast I drove to the refuge to collect Grizzli, he jumped into the car and off we went.

Doggy paradise is the only way to describe what awaited us. There was an enormous enclosed field leading down to a shady pool in a river. In the field were 7 donkeys, cats, chickens  and the family dogs.  Grizzli leaped out of the car and was very keen to meet his new playmates. He was very well behaved with all the animals so we carried on down to the river. What a relief this must have been for this enormous Newfie who had just come out of a concrete kennel in 35 degrees heat! After a dip in the river, we sat in the shade and it was very apparent that the new family were delighted with him. So Grizzli has a super new family and the potential of a really fantastic life. Let’s hope that he behaves himself this time!

Grizzli with his new family! 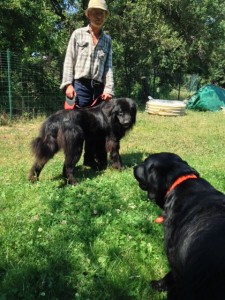 2013-07-09
Moira
Previous: Dyson and Crackle Leave but Lots More Arrive!
Next: Visiting some of our dogs who have gone international!