Its really great to get news and pictures of dogs after they are adopted and we already have pictures of Bleu and Maddox who were adopted yesterday.

However I was really delighted last night to get am email from the adopters of Volt, one of our border collies who went to Border Collie Rescue.  Volt was an adolescent who needed a lot of help and that’s why we work with such rescues. The have the staff and facilities to work with the dogs and it gives them a great chance ensuring that their next home is their forever home.

Here is a little of what Volts new family have to say ‘ Volt is still fixated with playing ball and finds a new  tennis ball in the grass everywhere he goes. He likes to climb on the sofa or the garden chairs and , after being very active with his toys or a ball, sleeps a lot. He also likes to climb on us. He is a terrible food thief and we have to put everything out of his reach.
We live in two places, London and Dorset, and fortunately he travels happily in the car with us. He was cautious of strangers, particularly men to start with, but now enjoys the company of other people who make a fuss of him although he barks at passers by and takes his guard dog duties seriously. He also now likes coming to the pub with us and being fed dog biscuits by the bar staff. He has even got used to lying by our feet and being patted on the head by everyone who passes, as is the custom in the country. We have a stream in the garden and the way he works up and down it makes us think he may have been used for duck hunting and he appears to be part Pointer. Perhaps this is how he originally got lost!’

So after spending three quarters of his four and a half years in a refuge Volt has his happy ever after family! Thank you to BCR and to all of the associations who help us!

Last but not least is a photo of recently adopted Teasel , who is having great fun with Pepper ( ex Flavie) and sister Tally. Its great to seee dogs in happy homes so please do keep sending us your photos! 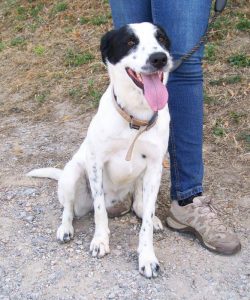 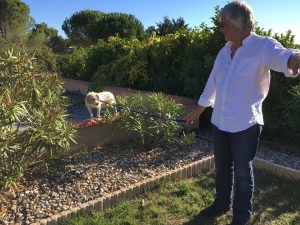 Maddox…tired out after his journey home.. 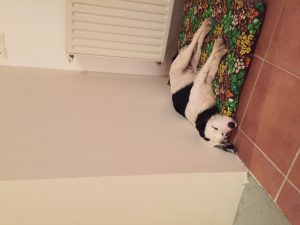 Teasel and Pepper with Tally in the middle! 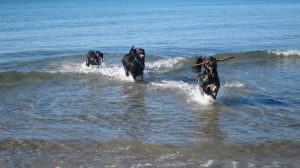