Home / Latest News / Help, my dog has bitten, what should I do?

Help, my dog has bitten, what should I do?

This is a question that has been asked many times at the SPA, and I think it is an important one for those of us living in France. What should we do if the unthinkable happens and our dog bites someone, be it a stranger or a family member.

There is a French law that relates to this. Decree of 21 April 1997 concerning animals who have scratched or bitten relative to article 232-1 of the rural code, and law number 2008-582 of 20th June 2008 modifying the rural code, just in case you ever need to quote these to anyone.

The law states that the fact that the dog has bitten should be reported to the mayor. After this, the dog should undergo 3 visits to a vets for blood tests (even if he is vaccinated against rabies) and for an assessment of character. The first visit should be made within 48 hours of the bite, and then at weekly intervals. If the dog gets a clean bill of health, (both in terms of rabies and behaviour) then that is normally the end of the matter. But of course it depends very much on whom your dog has bitten, and how hard!

In practice, if your dog is vaccinated against rabies, the person who has been bitten (the “bitee”) may be suitably mollified. But this is not always the case.

A friend of mine’s dog bit someone on the rear end, not very hard, but enough to draw blood. The woman’s doctor requested that the dog go for the three vet’s visits, but no report was made to the mayor, as the “bitee” was very good humoured about it, and just wanted to be sure that she was not at risk of rabies. If a bite is serious, things are very different, and sadly if a vet determines that a dog risks re-offending, then the dog may have to be put to sleep.

Of my four dogs, only one, Bella, risks nipping. She came from the SPA, and had been badly beaten beforehand. However her biting is directed solely against things that move quickly. She loathes joggers and cyclists, and although I do my very best to avoid places where they are likely to be, about once a fortnight we come across some intrepid soul on a mountain bike. If Bella is not on the lead, she will fly after them with bared teeth. If they stop, she will let herself be patted, but as soon as the movement starts, she is off again. I try and get her on the lead as soon as possible, but I do not keep her on all the time, as meeting a sportsman is so rare that it is a shame to never let my dog off “just in case”.

If she does ever bite (so far touch wood she has not done so, apart from her first time at dog school and Carole has forgiven her!), I will keep her on the lead at all times for her own protection. At the vets she is placid and calm, so there is no way she would be classed as dangerous. Unless you are a cyclist or jogger, that is!

Of course the best thing is to avoid letting your dog bite. If you know he or she has triggers, avoid them as much as possible, and it is worth giving him a rabies injection as this may reassure people should disaster strike. Bella has been vaccinated against rabies, my other dogs have not.

If a “biter” is brought to the SPA, we need to know all about the circumstances of the bite. It is not always the dog’s fault, and a classic is an unsupervised dog with a child. Who knows if the dog was provoked and was merely trying to defend itself? However I understand completely why a family would lose confidence in the dog and no longer wish to keep it. It does not make the dog unhomeable, however. We just need to make sure that his new owners are aware and that the dog is either not homed with children, or that he is not given the opportunity to bite again. 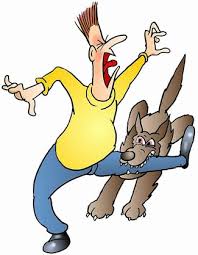 2014-08-10
Darcey Dyson
Previous: Four adoptions including a long- termer!
Next: Isa and Canelle on tour, plus four adoptions!