High drama at the SPA

Question: Can two women in the prime of life (!) with a total weight of about 110 kg stop a car from reversing? How about if the car contains two adults and two dogs, one of which in in the process of being stolen by her owner but is unidentified? Answer; Well, not quite, but we provided a bit of a distraction, which gave me enough time to yank open the car door and nick the car keys. Meanwhile my fellow Wonderwoman was extracting the stolen dog and returning it to the refuge. I then got a bit potty-mouthed (sorry, mum) and we called the police.

Several other employees and volunteers stopped anyone (mostly me) from being attacked, and all the SPA neighbours came out to have a look. Two lots of police arrived and we then spent 90 minutes in negotiation. End result? The dog left identified, but the keys to all the refuge doors (which had been stolen when the crazy lady broke in last week) have been lost, apparently thrown into the canal. As for the medicines and syringes she stole, we can only assume that they have all been used.

Never a dull day! The police have assured us that a prosecution will not result in financial compensation, so if anyone reading this can help us replace the barrel locks on the doors of the puppy house and the parks, we would be very grateful. Thanks to everyone who helped out today. No one steals our dogs! We are small but mighty!

In other news, little Vanilla was adopted but her place was taken by a dog at least ten times her size. Here is the newest resident of the SPA, Grizzly, a beautiful gentle but lively Newfoundland!

I am off to have a glass of wine! I am too old for this sort of excitement! 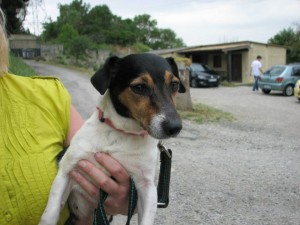 But look who arrived! 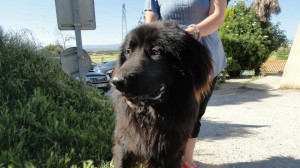