Posted by: Darcey Dyson in Latest News, Life After The Refuge January 29, 2020

On Sunday we blogged about the adoption of Roquette, now renamed Nogi, mentioning that she had gone to live with recent DRC home to home success, Djabu. We mentioned that we would tell you more about this later in the week, and here we are!

A bit of background to refresh your memories: In October DRC was contacted about a magnificent blue merle Great Dane by supporter Jane. She had heard of his plight and told us that he was threatened with a one-way trip to the vet were a new home not found within two weeks. This may or may not have been a genuine threat, but it did bring a sense of urgency to the situation.

As it happened, it took just 24 hours for Djabu to find his new home. 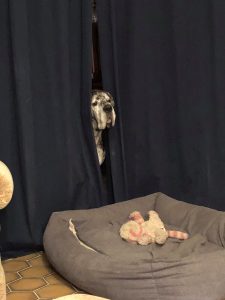 His new mum, Renia, wrote this piece for us.

“There I was, innocently cooking dinner one evening, late autumn last year when ‘I think we’ve found our dog!’ came my husband’s voice from the sofa…

He had seen a FB post from Dog Rescue Carcassonne about a five year old Great Dane urgently needing a new home. As soon as I saw the photos, I agreed: We had found our first dog together. 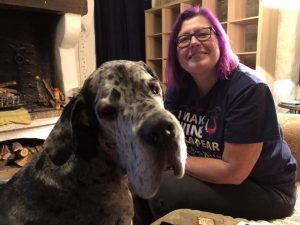 Zaba with his new mum

Laurie replied to the post and said that we were very interested. Two days later, we met Djabu, a beautiful, blue Merle, and went for a walk with him and his temporary carer, who was unable to keep him any longer. Our minds were quickly made up and we agreed that we would come to collect him after our planned trip away. 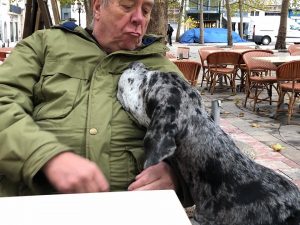 As soon as we were back we drove over to collect our new family member. As soon as he was called from the house, Djabu positively galloped out to meet us and gave us the best welcome. Then, as soon as Laurie opened the boot of the car, he leapt up. This dog wanted to come home with us, no doubt there! An hour later, we were home and Zaba, as he is now known, settled into his bed, as if he’d always been with us.” 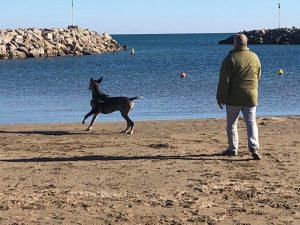 Enjoying the freedom of the beach

Isn’t that a lovely story? And you can see how well Zabu has settled in by the fact that Renia and Laurie have just adopted lovely Roquette (now renamed Nogi)

If you would like to share the story of you and your DRC home to home or ex-ScPA dog, please get in touch. You can write to us via our Facebook page or send an email to us at website@dogrescuecarcassonne.co.uk 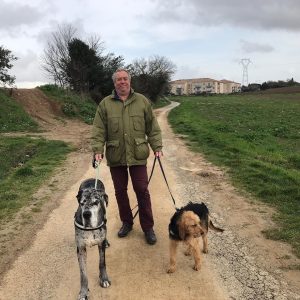 Zaba and Nogi on their first walk together