We live in a modern era. There are so many ways to meet a life partner. Some of us meet our match at work, in a social situation, avenues that have been open for decades. Internet dating is a relatively modern phenomenon, but can be just as successful in helping bring people together.

Today an internet romance came to fruition when the two parties met. On one side we had a human, Gabriella, who was obviously the more active in terms of her choice. On the other side we had a dog, Calysta, who was busy being adored from afar. We knew that providing the chemistry was right, it would be Calysta’s ticket to freedom.

Calysta, you may remember, was found on a well-known dog walking route, and although she had clearly had an owner, they did not make any efforts to find their dog (who, guess what, was not identified). Gabriella had seen her on the website and was sure this was the girl for her! So today Calysta found her new home and we wish her and Gabriella every happiness.

Another lucky girl was Clara, whose brother Rocco left us last week. Again she had been spotted online, and although her new owners had come to meet her, she was unable to leave her kennel to meet their dog, as she was recovering from a nasty tummy bug. So rather than taking any risks, she had been reserved pending a compatibility test. No problems there, by all accounts, so Clara now has a jack russell as her new buddy!

And there was a third lucky girl. Beautiful Cora, a seven year old Anglo, was brought to the refuge having been found wandering many miles from her home. She was tattooed, and her owner came to collect her immediately. I am pleased for her, and sad for the gentleman who brought her in, as he had planned to adopt her. And if I could get away with it, I would be tempted too! As it was, I had to be satisfied with a lovely cuddle.

Loads of volunteers showed up to walk dogs, and with one exception they were all girls. So it was a real ladies day at the SPA! 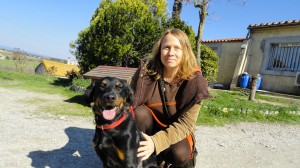 Clara  and her new family 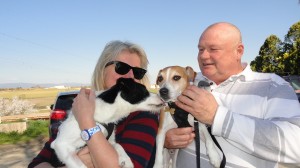 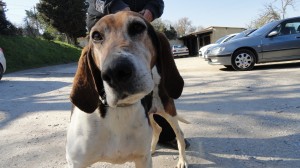