We are fast approaching the season in France where the vets are inundated with scratching pets who inevitably have fleas or an allergy to flea bites so tonight I thought that I would relate my horrific experience which will ensure that everyone who reads it certainly wont forget to treat their dogs or cats!

Ticks and fleas are the most common ectoparasities in dogs and cats and fleas will happily jump from one host to another. The life of a flea is fascinating and one that I now know all about!

Last year, my dogs were treated monthly with advantix and I never thought much about fleas. In May five, three week old kittens  arrived at the SPA and I was delighted to offer my services as a foster mum. When they arrived we flea treated and then again four weeks later. It was holiday time and my neighbour who has several cats asked me to feed them whilst she was away. This was no problem but I did notice that I was bitten quite badly each time I did this so did suspect they had fleas.

Soon it was July, and very hot and humid when another two dogs came to the house, both were travelling with me to the UK in August so,animal wise we had a full house! Right up until we left, none of the animals were scratching, nor was I bitten in my house and we shut up the house and off set for the UK.

A week later a builder who was going into the house to do some work called to say there were fleas everywhere, so much so that he couldn’t work! You can imagine my horror! I didnt really believe him so got our volunteer Rebecca to pop around and check and yes, there had been no exaggeration, there were in fact fleas everywhere!

Our priority was to get rid of the fleas and get the builder into work so we called out the French equivalent of Rentokil. It was August, when lots of companies are short staffed due to holidays so a same day call out was not cheap!  This was however very, very effective and after 48 hours the builder was back in and no fleas were apparent.

All the animals involved were vet treated for fleas, my car and also the builders van also had to be treated.  So how did this happen? We will never know. Maybe the kittens were so young that the treatment hadn’t been effective and fleas from when I was feeding the neighbours cats hitched a ride, maybe one of the extra doggy visitors had them or maybe shutting up the house when it was hot and humid didnt help, we will never know but one thing is sure, I still have nightmare about these fleas and am still paranoid that they reappear. Please, please treat your animals.

The choice of treatment applications is vast .You can buy various spot on treatments or tablets from you vet and there are flea and tick collars widely available as well as  shampoos and  pump action sprays. Most kill adult fleas and contain an insect – growth repellent which prevents any fleas from reproducing.  Sprays and flea bombs are available to treat the home too.

One thing is sure, prevention is much cheaper than paying the consequences of a full blown infestation and is certainly worth every penny! 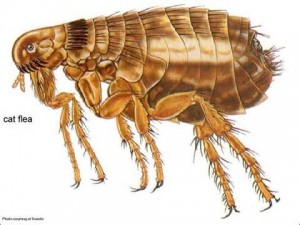