Home / Latest News / Joey Star leaves and Moira and I have a laugh!

Joey Star leaves and Moira and I have a laugh!

Thanks to Carole the photos of Joey Star had already been published on Facebook before my blog had even been written. By the time the blog was on Facebook, Joey’s owner had already seen the photos and had contacted us! Joey’s real name is Tyrex and today he left the SPA with a brand new micro-chip and a very happy owner!

So that was great news to start the afternoon!

Otherwise there was some activity, but none of it good. The owner of the two setters, Hunter and Barbour, arrived to collect his dogs, whom he had lost over two weeks ago. He refused to have them identified, however and was quite vocal about this fact. It was pointed out to him that it was not us that were taking his money, and that it was a legal requirement that the dogs are identified, but he was adamant. And aggressive. Luckily the Police Municipal happened to be at the refuge, so monsieur left without his dogs.

So for the sake of 120 euros he prefers to give up two fabulous animals. What love he must have for his dogs! The strangest thing about this is that Hunter’s name really IS Hunter! What are the odds?

There was one other part of the afternoon which was funny but only to people like Moira and me, and everyone else who has a warped sense of humour. The two of us were walking dogs and were joined by a husky, who is often seen wandering near the refuge. I took a photo of it in case it was lost, and it followed us for most of the walk. The same thing happened on the next walk, the husky followed us. This time I heard someone beeping their car horn (but not getting out) to attract the dog’s attention, so I walked back down the hill to get the husky to go towards its owner (as I believe is correct dog etiquette).

It was then that I got a torrent of abuse, and accusations that I was stealing the dog! I explained that I was walking SPA dogs, but no, apparently I was doing so deliberately in order to steal the husky. Yeah, like we don’t have enough dogs already! I tried (again) to explain that I was not stealing the dog, that I had no lead other than the one I was using to walk the SPA dog. At this point the charming lady told me to do something that I won’t spell out here but which is in fact is physically impossible.

I had to laugh. She would be better off enclosing her garden and /or keeping her dogs under control than wasting her energy shouting rude words in public.

Made Moira and me smile, though!

Just another day in the madness of the dog rescue world!

Hunter- not worth the cost of a chip 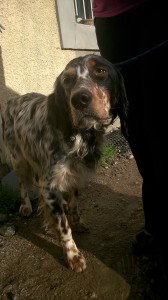 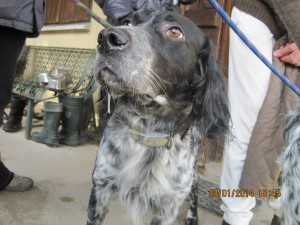