Home / Latest News / Just because you are stupid, don’t assume we are too!

Just because you are stupid, don’t assume we are too!

Yet another busy day at the refuge, with a couple of new arrivals but a couple of departures, too. And thanks to the volunteers and some lovely sunshine, several dogs were walked.

On the adoption front, little Kerno left, which is great news for him and for us too, of course. His big eyes melted everyone’s heart, and it was lovely to see him leave before spending too long with us.
The second departure was that of Talbo, who has been with us since the end of November, much to everyone’s amazement. Usually dogs this small go really quickly, but Talbo was upstaged somewhat by the arrival of Alec, who looked just the same but who was younger and smaller.

In any case today Talbo left with a lady who has another identical dog, the two of them got on very well together and a lovely life awaits this little chap.

A couple of dogs arrived, as I mentioned and once their pound time is up, they too will be available for adoption. One of them, Dingo, should appeal to lots of you as he is small and fluffy, although right now he is in a bit of a state.

Now, what is this blog’s title all about, you may be wondering. Well, here goes. When you come to the SPA with a dog who is identified, it does not take a rocket scientist to find out that you are the owner of the dog. So to Mademoiselle X who brought us the skeletal Rottweiler whom she had “found”, don’t assume we are incapable of phoning the breeder and finding out that in fact you are the dog’s owner. Or rather your sister is. Your sister who has the same surname as you. I understand that it is shameful to abandon an animal who is clearly underfed, and yes, you SHOULD be ashamed of yourself for not looking after this wonderful dog. But at least have the courage to admit he is yours and don’t assume we are idiots. As to your plaintive “but we have spent money at the vets on the dog”; you certainly didn’t spend much money on food, that’s for sure! Nice fake designer handbag, by the way.

Don’t worry, all you Rottie lovers, the breeder is going to collect the dog on Monday. His few days at the SPA could have been avoided had his “owner” taken the trouble to phone the breeder, which is what we did.

Sometimes I wonder what dogs would say if they could speak. I am sure most of it would be derogatory. And justified. 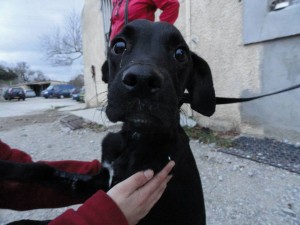 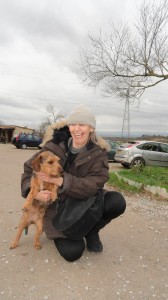 “Not my dog” arrives. Yeah, right. 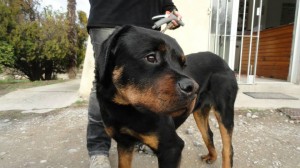 2014-01-09
Darcey Dyson
Previous: Playing chicken!
Next: From Scrapheap to Safety