Well, a new week has started and some great news from the refuge already with the departure of the second of our two rubbish tip survivors, Cacoa (now Kobi). Like his brother, Praliné, Cocoa was one of the two stronger pups, but even so we wanted to make sure he was fit and well before his new family adopted him. I know they were initially disappointed not to be able to take him home immediately (it really was love at first sight), but they saw the wisdom of leaving him with us until we and the vet were happy that he was okay.

Kobi’s new owners are none other than the parents of Rosa, our volunteer and some-time translator for this blog when it is on Facebook. So we will have lots of news of his progress, and in fact the first picture has already arrived! I think Rosa will spend more time at her parents’ house now, rather than in Toulouse where she lives!

On the subject of puppies, several people have asked questions about new-born pups and added comments to yesterday’s blog concerning the psychological development of puppies who have not spent adequate time with their mothers. This will be the subject of a future blog, but for now I will just say that yes, you are right. Dogs should spend a minimum of time with their mums in order to ensure that they are  well-balanced in later life. Watch this space, as they say.

In other refuge news, one of Saturday’s arrivals, Octo, found his owners today. His real name is Puma. And yet another puppy arrived, this one is ten weeks old. Another Christmas reject, perhaps? Pictures of him will arrive in due course, all I can say for now is that it is a boy and that he will be of small size when adult!

Other than that we have had a reservation that is almost unbelievable, and although I am bursting to tell you all, I won’t do so until the deal is done. Thursday is going to be a BIG DAY, that’s all I will say!

Yet another reason to keep following this blog!

Kobi at home with Rosa 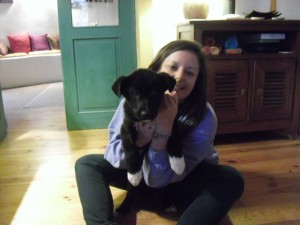