Today we had three adoptions and we are delighted!

First to leave was Smurf. He arrived at the SPA in late June and initially was regarded by some as being aggressive, as he hid at the back of his kennel growling. However the employes who looked after him knew otherwise knew better, as did any of the volunteers who spent any tine in the kennel. Just sitting calmly would result in a little dog belly-crawling forward till he was within cuddling distance. Like so many of our arrivals, Smurf was terrified. Terrified by the noise at the SPA, terrified by people who had no doubt beaten this little lad.  It took a few weeks, but he gradually realised that that period of his life was over, and from now on there would be nothing but love.

He was soon sharing his kennel with Cesar, and the two dogs were inseperable, until Cesar’s adoption exactly one week ago. Smurf soon found a new kennel mate, however, and his move to a different part of the SPA brought him luck, as the increased visibility brought him a home of his own just four days later. We are so happy for this lad who could so easily have been left behind. His new family have another ex-SPA dog who was a bit nervous when she arrived at their home, and they are perfect for Smurf.

Funnily enough Smurf’s most recent kennel mate, Kalouf, was adopted today too. He arrived at the other end of the confidence spectrum, although both dogs were about the same age (about 6 months old)  when they arrived. This is yet more proof of how crucial a dog’s first few months are to his future deveolopment. Kalouf was already a happy, outgoing and well socialised dog, and we have no idea why he arrived at the SPA, other than that he is quite a big lad, and perhaps he outgrew his family’s expectations.

Luckily lots of people like big dogs, and despite few weeks with no interest, Kalouf suddenly became one of the most popular dogs at the SPA. By this time, though, he was already reserved. His new family was looking for a big young dog, they saw Kalouf on the internet and came along specially to meet him. Due to family commitments over the holiday period they were unable to adopt him immediately, but today their return heralded Kalouf’s departure and the start of his new life.

The third dog to leave has perhaps given us our adoption of the day. Poupette has found a home after being abandoned towards the end of September at the age of nearly 12. It has been horrible seeing this dog, who was used to a warm home and affection lying looking miserable in her kennel. However that is all over now! Poupette’s new owner recently lost his ex- SPA dog Tesson (who some of us remember) and wanted to offer a home to another needy soul. How lucky was Poupette that she is fine with cats, even if she doesn’t like other dogs. We are all so happy that this elderly lady is no longer living outside in the cold. 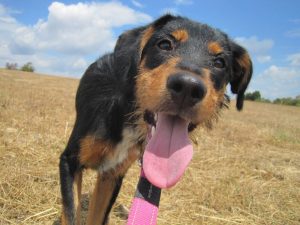 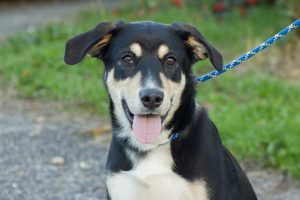 And Poupette who celebrates her 12 birthday with a new home! 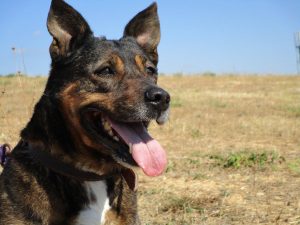