Posted by: Darcey Dyson in Life After The Refuge March 9, 2019

Here is a lovely story for Life after the Refuge telling the story of Paddy. He is one of Griff’s brothers, and so perhaps this will give people some idea of what to expect if they were to offer Griff a home. Much of Griff’s evolution has taken place at the ScPA, but Hamish and Tom had it all to deal with at home in the case of Paddy. They have done wonders, as you can see.

This is what they say:

We had been keeping an eye on the Dog Rescue Carcassonne website for a couple of years and had seen many dogs that pulled at our heart strings but the timing never seemed to be right. We were either moving house to France or living back home in Edinburgh during the winter months.  A few weeks before we returned to France in 2018 we had been in touch with Darcey by e-mail about 2 dogs who took our interested. The first was a rotweiller and the second a mixed breed dog called Panda.  So it was with much excitement that we finally made our way on the 15th March 2018 to Carcassonne to visit these dogs. 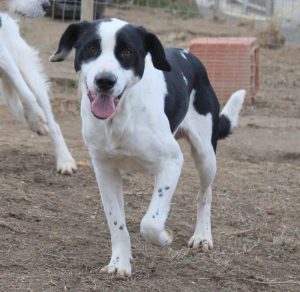 Panda (as he then was) at the SCPA

Panda was the first dog we met. He was one of three dogs brought to the SPA at the age of two having spent their lives hitherto in a garage as their owner did not want them when they were born. So with this in mind it was no surprise when Panda greeted us by cowering on the ground, rolling over and peeing. He had endeared himself to us at once.

We took Panda for a walk along with his kennel carer Ingrid, who luckily spoke enough English to tell us a bit more about him.  By the time we got back to the kennels there was no doubt that he was the dog for us and within 20 minutes the adoption paperwork was completed, good news photographs taken for the website, goodbyes said and Panda was in our car heading for a new life in our home near Uzes over 2 hours away. Soon after we got home Panda became Paddy. Not because we did not like his name, indeed given his facial markings it was perfect, but we just could not remember it when we needed to get his attention.

For the first 4 months we wondered what we had let ourselves into as it was clear that we were sharing our home with a very cautious Paddy rather than having a new member of the family. During this time we were treated to the full range of Paddy’s quirks most of which were accompanied by stress peeing and cowering. He would not eat if we were in the room, would only let us put his lead on if we were sitting down, visitors frightened him, we were not allowed to touch him unless we were sitting down, if out for a walk he would weave back and fore behind us rather that in front or beside and if we encountered even a small group of people he would tremble and stress pee or even poo, he would not let us near him when he was in the garden preferring to hide in the bushes, once out of the house it could take hours to coax him back in, he did not know how to play, was not motivated by food, had zero recall when off the lead. The list could go on but throughout all of this there was still that spark in him that we saw initially and a look on his face which said he wanted to interact but did not know how. 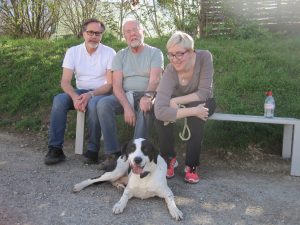 The newly renamed Paddy on the day of his adoption

We had a friend’s dog called George stay with us for a couple weeks. George had none of Paddy’s problems. Paddy learnt a lot from watching the carefree George running around and tucking into his grub regardless and after a few days Paddy was happy to run in and out of the house and became much more confident.

We set a fairly strict routine for him to get accustomed to things. As time went on we introduced new experiences. Some he coped with some he didn’t.  When we found something that worked we would repeat it time after time to build his trust and confidence that nice things happen and gradually his trust in us increased and the stress peeing decreased. He adores being in the car and this became a safety zone for him. If he became too stressed in the garden he would jump into the car to calm down with a short drive round the village. Most of the time we left him to his own devices to just get used to his new life. As time went on in the evenings we would roll him onto his back and wedge him between us to pet him. This scared him to start with but after a few times he would come to us and roll over hoping to be pulled around and tickled.

At first, when people came to the house he would cower in a corner of the garden. The people who came most often such as our builders tended to have dogs so knew how to deal with Paddy and by the time we left for Scotland Paddy would happily go by himself to see what they were doing and monitor their work. 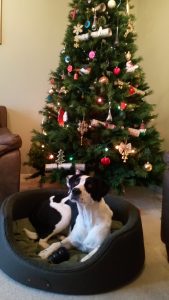 When we returned to Edinburgh we were expecting Paddy to be frightened by the sights and sounds of a city. Yes there were things that did, and to some extent still do, scare him such as joggers, children on bikes or scooters, high visibility jackets, prams and pushchairs, or people walking behind him especially men. He has however embraced living in the city. Traffic does not frighten him in the least (which is a mixed blessing) and he adores going on buses and will try to get on one at every opportunity. From the start he happily socialised in busy bars and restaurants and wander round looking at and sniffing people. His favourite places to walk are the beach and the park which is great as we live next to Holyrood Park where Paddy has 260 hectares to play in every day.

So almost a year on what do we have? Paddy is totally unrecognisable from the timid dog we took home. His confidence has grown immeasurably and he has not stress peed or pooed for months. What is more exciting for us is that his recall is now very good which has given him the chance to run off lead amongst the bushes and undergrowth on his daily walks or on the beach while we relax knowing he will come back when we call or whistle (well at least 90% of the time!). This also applies in pubs and bars when he feels it is his turn to take a shot behind the bar or in the kitchen. His pulling on the lead has lessened over time especially when we put him into a harness after he slipped his collar in the centre of Edinburgh.  He is learning to play although doggy toys are still a mystery to him. He is getting better at letting visitors to his home get close and even pet him. He loves being petted by us and will constantly be lying at our feet, rolling over wanting to be stroked and given the chance will make it last for ages.  He has learnt several commands which we can build on as he has now decided to be treat orientated. He wanders round with his tail wagging high in the air and happily makes eye contact. If there is the slightest hint of him going for a walk he is jumping around wagging his tail and desperately trying to get his head into his harness. However his biggest thrill is still going out in the car. One shake of the car keys and he is running round in circles waiting to be let out of the house and when let loose, runs as fast as he can to get to the car. 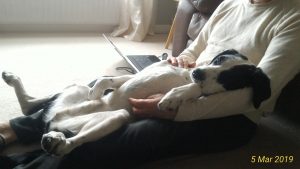 A much more relaxing looking Paddy

If Paddy could talk he would probably say his perfect day would be a long drive in the car to the beach in the morning followed by a bus ride to a pub in the afternoon. And to round off the day his evening meal followed by excessive amounts of cuddles and tummy rubbing. 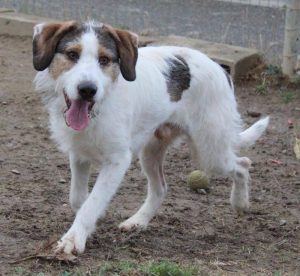 Griff is Paddy’s brother, he is still looking for a home

2019-03-09
Darcey Dyson
Previous: Balou becomes a king of the road!.
Next: Adoptions of Sally, Rockett and Jaffa