Today saw the adoption of Toby, aka Moby. This dog had been brought to the SPA on 13th November by a woman who had seen him alone and starving in a field close to her home. She did everything she could to find his owners, but as he was unidentified, there was very little to go on. Toby could have spent a long time with us, as adoptions are not exactly in full flow at the moment, especially when it comes to big dogs.

However Paula’s interest in Toby did not stop once he was at the SPA. She found a neighbour who was looking for a dog, and once the pound time had been completed and castration carried out, off went Toby to his new home. Shame the same can’t happen for all the dogs who arrive.

It was interesting talking to Paula on the phone this morning. She just couldn’t understand why the pound time of 10 days should apply to a dog who was not identified. Like many of us, she feels that the least people should do for their dog is identify him. Especially as this is the law. The 10 days then give enough time for the SPA to contact the owners and for them to come in and collect their dog. It should not be a kind of period of amnesty for irresponsible owners to put things right.

Yesterday we had the adoption of puppy Filou, who was lucky enough to have been with a foster family instead of the SPA. Many thanks go to them. And on the subject of pups, there has been lots of interest in the BORDER litter….which of them will be the first to go, do you think? 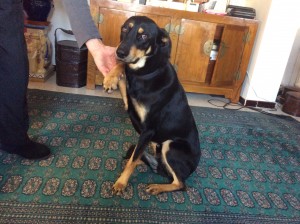 Filou – ADOPTED. Thanks to his foster family. 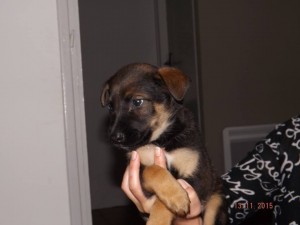