We love having adoptions on a Monday, as it lifts everyone’s spirits enormously. After a surprisingly long ten weeks at the refuge, Puppy Merry left for his new home today.

Eagle-eyed readers might remember puppy Pippin, who was adopted ten whole days ago. Well he and Merry are brothers. Both dogs arrived with a skin complaint, resulting in several weeks’ worth of isolation. Once the pups were visible, Pippin was adopted immediately, but it took a bit longer for Merry to find his new family. This was quite a surprise, as experience has showed us that black dogs take longer to be adopted. The black and tans are usually very popular.

Merry has not been alone since saying goodbye to his brother, and has been sharing one of the small outside parks with a variety of dogs. Now however he will have to get used to something new, as his new pals will be humans, including small ones, plus some rabbits and a parrot! We are sure that Merry will adjust to his new life perfectly and make his new family very happy. 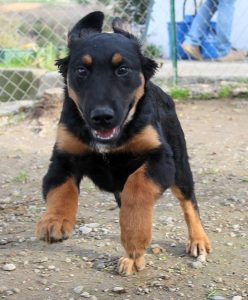 Let’s hope today’s adoption bodes well for the rest of the week.

2019-01-21
Darcey Dyson
Previous: The story of Dylan McMullen…
Next: Adoptions of Goupil and Google