Today was…how can I put it….mixed!  On the good news front, the sun shone brightly and the event on Place Carnot was a huge success, with plenty of interest shown in the ScPA, and lots of visits from adoptees and their new families. Photos will be posted in due course, I am sure.

Now onto what happened at the refuge. Getting the bad news over with straight away, employees and volunteers said a sad farewell to Oxmo, who has gone to the big kennel in the sky. This very old American Staff (identified) was found in a nearby village and although it was possible that his owner would reclaim him, seeing the state of Oxmo, a one-way trip to the vets seemed the most likely outcome. Just a shame it had to be with relative strangers, rather than with his real owner. This is sadly indicative of the moral courage of certain individuals.

Although his time at the ScPA was brief, Oxmo touched the hearts of many people, and of course he did not die alone. Many thanks to the employees who accompanied him on his final journey. 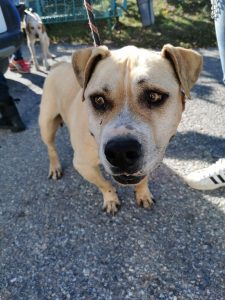 Next up good news. Aiko, an Amstaff of whom we have no pictures, left for a long term foster family. This is because he is very seriously ill, despite being just two years old. He is lucky enough to have found a family to take care of him knowing that he has limited life expectancy. Huge thanks to them. 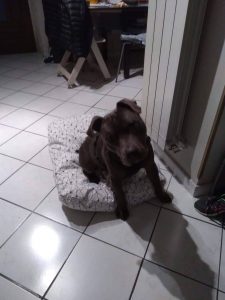 Finally after almost a year Julia left the refuge. This American Staff arrived in early January and was the first dog to be put into the ScPA’s album of miraculous survivors. When she arrived she was absolutely skeletal after severe neglect; hard to imagine that she was not a stray. Less than two months later and she was a different dog, full of life and fat as butter. Yes, that is all the time it took for her to recover, thanks to the tireless efforts of the ScPA. 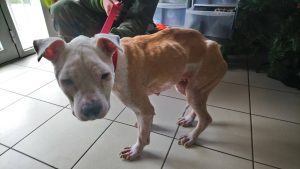 Julia when she arrived in January

It may surprise you to know that she has now gone back to her original owner. But don’t worry, this is not the person responsible for Julia’s terrible condition; all the mistreatment happened after the couple separated. Photos taken before this show Julia to be a much loved member of the family, and we hope that is what she will be once again. The ScPA will be monitoring her progress and Julia will always have a home back with us if ever she needs it. 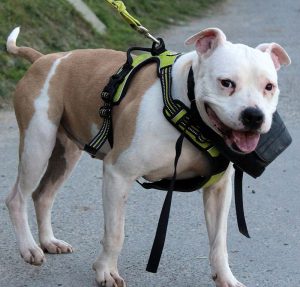 As I say, it was a mixed day, but there was a reservation and perhaps another wonderful one to come.

2019-11-16
Darcey Dyson
Previous: Adoption of puppy Texas
Next: Adoption of Goltenk and Lazare’s dream is over