Monday adoptions and catch up!

For any non-Facebookers out there, a final couple of words on the dog show. With the addition of €3.02 this morning just to round things up (yes, I am a bit OCD), the grand total was a massive €1000. This excludes the money made on the refreshments to benefit Languedoc Solidarity with Refugees, which was considerable, too. So many thanks to everyone for their generosity.

Photos of the day can be seen here.
You can see the list of winners here.

Now, back to news of the ScPA.

The refuge was very busy on both Saturday and Sunday, as there was a photo competition, which is hoped will bear fruit in the form of future adoptions. And as well as lots of dog walkers and phtographers, there was also an adoption.

Yoshi arrived in early July looking thin and generally unwell. He was identified but, probably lucky for him, his owner never came to collect his dog. This meant that Yoshi was able to trade up, finding a wonderful family. By now, of course, he was looking much much better, as these “before and after” photos show. Many thanks to his new family, we hope he rewards your love a thousand fold, as most rescue dogs do. 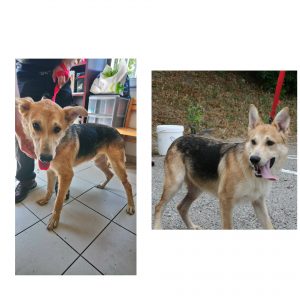 Yoshi (before and after) – ADOPTED

Today got the week off to a good start, too, with the adoption of puppy Buddy. He arrived in early August with his mum, Raina, both dogs were in a terrible state, as they were suffering from mange. So this poor little lad had to be isolated until he was no longer infectious. Isolation from the other pups means more time with people, though, so this lad has had plenty of cuddles, even before joining the other pups for the last week or so.

Helen and Malcolm came along last week looking for a pal for their Westie, Archie, who always seems a bit glum when he doesn’t have a canine friend to play with. So what would he think of a puppy? Well, wisely they intend to use a varykennel to be able to give the dogs some downtime, but none of them could resist Buddy, now renamed Louis. He is moving to England in mid-October, where we have no doubt that he will cut quite a dash. There are not many griffon vendee in that neck of the woods! 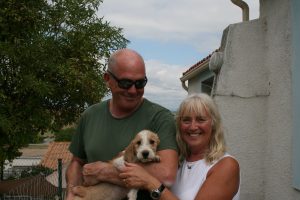 Another griffon left the ScPA today, too, lovely Gaya. She arrived in mid July and seems quite calm, until you see her racing round the park with her playmates. She is not yet one year old, so we are pleased that she has found a home where she can happily spend the rest of her life. No, in case you are wondering, this is not Buddy’s mum. That is Raina, whose ears are a good few inches longer. 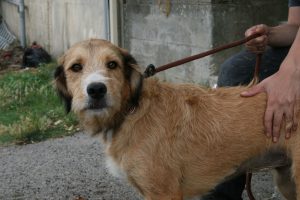 We had a very exciting reservation, too, so you might want to watch this space !