Home / Life After The Refuge / My Fostering Experience 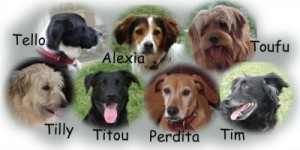 Short-term fostering is needed from time to time for a number of reasons.

A dog may be recovering from surgery or illness and need a quiet place to convalesce, or just need somewhere to stay while waiting to be collected by his adopter.

The SPA is a haven for many dogs that have been found wandering and alone, but for others it is just too traumatic and confusing and not the best place to be. A dog who stops eating or just cries all the time will not be at his best when people come looking for a dog so a foster home can help to lift his spirits and get him ready for his new life.

My story began with an adoption and then changed direction somewhat.

A while ago I adopted a little ex-chasse Fauve from the refuge who had been found thin and dirty, wandering around a village in the Corbières. It turned out he was about ten years old with quite a number of health problems but he cleaned up well and was a happy little soul, loved his food, his cushion on the settee and adored to be out walking. We had quite a few worrying incidents and trips to the vet which didn’t seem too bad at first but unfortunately after only three months his lumbar vertebrae collapsed completely and he was in such pain with no hope of recovery that the vet and I made the only decision we could. I cried for days. He’d touched my heart so much. After a couple of months I decided to offer to do some fostering for the refuge which would keep me in contact with dogs but without the total commitment (and heartache) of ownership.

Toufu was our first foster dog. He had been attacked by 2 errant Doberman dogs and lost a very large lump of his thigh. The initial choices in the town where he was picked up by the police were either to put him to sleep or to amputate his leg. But the SPA vet did a wonderful job to save him and so he began the long weeks of recovery to get skin to grow across the raw wound. He came to us when the circle of bare flesh was still almost 4 cm across and he wore a permanent lampshade collar to stop him licking it. With a daily application of ointment the wound slowly covered over with new skin and after seven weeks he was ready to leave for his new home in the Lot, being made a fuss of by the children on the campsite where he now lives with the owners.

Tilly came next while she waited for her new family to come from the UK to pick her up. She arrived straight from the vet after her spaying operation and a spot-on treatment for me to give her next morning as they had discovered she had ticks – the sort that reproduce and multiply on the dog. (Well I hadn’t heard of them either!!) Apparently her new cell-mate had brought them in and both dogs being very shaggy they were difficult to spot while they were spreading. I spent the next few days picking off hundreds of “plombs”, no exaggeration, still alive 3 days after the spot-on treatment. Fortunately Tilly loved being groomed and just lay there while I picked them off and dropped them into a jar of water. The beautiful, quiet, unassuming Tilly now lives in the south of England with her new doggy pals and a doting owner.

Next we had Tim, who was very upset at being in the refuge and was going downhill fast. He had been abandoned by his owners (after 8 years of family life) because of a house move or divorce or something. He seemed to have given up and just cried all the time in his pen. He proved to be intelligent and obedient and a pleasure to have and was soon enjoying life again. We only had him for 3 weeks when he was spotted on dog:links and was adopted by a lovely couple from the Vendee and now he is the happy companion of their 2 Labradors.

Perdita, a dainty little whippet cross was also very distressed at the refuge and had stopped eating. She cried every time she heard a car pull away and they think she must have been driven some distance away from home and dumped as they drove off without her. She was lovely, no bother at all. She soon got her appetite back and became a loving companion. a good little watch-dog and brilliant at catching flies. We had her for about seven weeks and now she lives near the sea in the Charente-Maritime.

During her time with us Othello (a handsome border collie cross) came to join us. He proved to be just the perfect dog for us and we decided to keep him so now Tello is ours. He gets on with everyone and loves having doggy friends to stay which means we can carry on fostering. He really missed Perdita when she left us but he loved Alexia just as much when she came along. The tiny setter cross of eleven months had obviously never lived in a house, but had probably spent her days in a pen with other chasse dogs, so she needed house-training. She was very intelligent and eager to please and was quite a character. She was with us for two months before going to another foster family when we went on holiday. She had a wonderful time there and now has a permanent home in the UK with a young family who adore her.

At the moment we are looking after Titou, a seven months old Labrador cross who just needs a safe place to stay for a while. He is going to be a big handsome boy and so well mannered and obedient. He’s a joy to have around. He adores water. He is doing his best to get Tello to swim instead of just splashing about in the shallows but they have a great time together whatever they are doing.

If anyone out there is thinking of fostering I can recommend it. It’s not as tying as owning a dog if you are away a lot, and by using the SPA vet there are no vet bills to pay. You will have a canine companion to talk to and get you out walking every day. AND you will be performing a very worth-while service. You can answer questions from prospective adopters truthfully to help them decide on the right dog for them. Dogs do not behave in concrete boxes as they would in a house so home-life experience is a great step to a permanent family.

Let’s face it you can never be sure what you are getting when you adopt a rescue dog. (Tello has the intelligence of a border collie and the calm, gentle good nature of a lab. There are probably a few more breeds in the mix as well but whatever they are they have worked brilliantly.) The same goes for most rescue dogs. They are a real mixture and remain a mystery until you get to know them away from the refuge.

People have said to me “I don’t know how you do it. How can you bear to part with them when the time comes.” Of course there are a few pangs when I say goodbye, a lump in the throat every time, but there is pleasure and a bit of pride too as I wave them off to start the rest of their lives. (A bit like when your small child starts school and you realise it’s the end of something special but the beginning of something bigger). I do worry until I hear they have settled okay though, and emails and photos about their progress are always welcome.

But this poem says it all really! 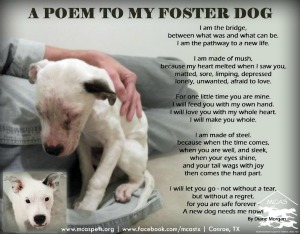