As you know, other than on the first Sunday of the month the refuge is closed, so Sundays are usually a time to discuss topics of general interest to dog owners, or catch up on news of old friends. However today is different, as we have news of a dog who has only just left the refuge, but whose story has touched many people.

People have written to tell us about their dogs, missing for several years, and how they are far more optimistic about finding them now, especially in those cases where they are identified. Likewise the fact that Charly lived a life of luxury while he was missing has reassured many of those whose pooches are AWOL.  It is easy to imagine the worst, but perhaps your missing dog is being well looked after by whoever found him.

True to their word, Charly’s owners have sent us photographs and news! Amazingly, the couple’s old dog, a St Bernard called Marylou recognised Charly when he returned home. This is after eight years, remember! He is getting on fine with the other dog as well as the cats. The family also have a donkey and a pony, both of whom were Charly’s friends when he was younger. And yet again they recognised each other and were all leaping around the place with joy!

Yesterday Charly’s mum took him to the local market where she bumped into an old friend who recognised him at once, and was amazed to hear his story. And today he went to a Carnival at a local beauty spot. Basically Charly has slotted back into his old life as if he had never been away. Apart from when his dad goes out without him, Charly’s tail is in permanent mode “wag”.

I am not sure if any studies have been done about dogs’ memories. I know that my dog, Scout, only sees certain people once a year but he never forgets them in the meantime, and welcomes them into our house with open arms (or paws, rather), which he does not do with strangers. I always assumed this was due to his sense of smell. I wonder if Charly’s case is unique or if there are other dogs out there with incredible memories. They say “an elephant never forgets”, but maybe a dog is no slouch in that department, either!

We are so happy for you, Charly!

More photos will be added later on, so come back and re-read the blog tomorrow for pictures of Charly out and about! 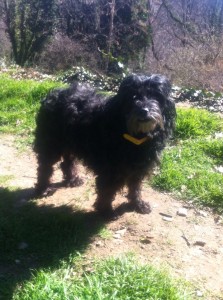 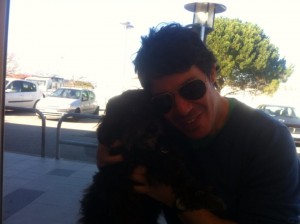 2014-03-09
Darcey Dyson
Previous: News from the UK and arrival of Gizmo, complete with torture collar.
Next: Gizmo’s owner has second thoughts and Colette is adopted.