Jaguer is one of those dogs who breaks your heart, but you are unable to help. He was brought to the refuge at the age of eleven following the floods last October; loss of their house meant his owners were unable to look after him. They were not alone, several other dogs came to the ScPA to be looked after for various periods, and in fact one is still waiting for his family’s home to be rebuilt.

This was not Jaguer’s first time at the refuge; he had been adopted when he was already quite elderly, and we knew that rehoming him would not be easy. This boy barks  a lot. When he feels he is being ignored he barks to attract attention and he bark with excitement on walks. He is fine with other dogs, and in fact since sharing his kennel with Sioux his barking has subsided somewhat, and we know that it is only the effect of the refuge. But it is hard to convince potential adopters of this!

Someone who knows him best of all is his former family. And today they came to collect him! In fact they formally adopted him again.(They had officially abandoned him in October, but that is a technicality). The most important thing is that Jaguer is back at home. And anyone seeing the reunion between dog and owner would be in no doubt that this is wonderful news. 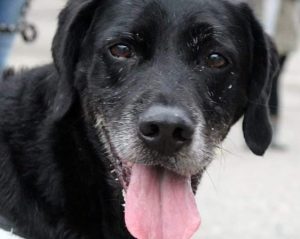 And then things got even better. Many of you know that we have been trying to find a home for Bouboule,  a 12 year old griffon cross. He is a lovely old man, his only fault being that he cannot stand being alone, and like Jaguer, he barks. He is fine with other dogs and cats, adores children. And for his age is in fantastic health. Finding him a home has been tricky, mainly because of the barking.

His plight has been highlighted on the ScPA Facebook page for some three weeks now, and although a couple of people have expressed interest, nothing concrete came of it. Until today, when Robin, who has long wanted to adopt Bouboule, was finally able to make it to the refuge. She and her children had fallen for Bouboule thanks to his Facebook photos, and when they met him today, they knew he was the one! 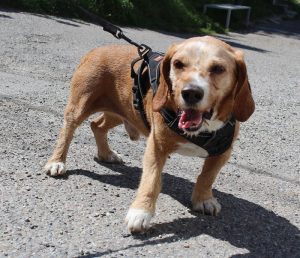 So that is two oldies homed in one day! After a relatively quiet week in terms of adoptions, today has put a smile on everyone’s face. And there is more good news due tomorrow…without wishing to spoil the surprise, let’s just say that Moira has a long-eared guest for the night!