One and Two makes Three

We promised you a blog yesterday but did not deliver, I am sorry to say. But that does not mean that there was no adoption, it just happened too late for the blog. And there were two adoptions today, so you get two blogs for the price of one!

Friponne arrived at the refuge in early July and has proved to be a very easy guest. She is small and well socialised and has been for numerous walks during her relatively short stay at the refuge. And when, a couple of days before she was due to leave, we decided to give her a wash and brush up, she proved yet again what a wonderfully calm dog she is. In fact it was my niece and her friend, visiting from Vienna, who took on the task (under the supervision of volunteer Corrine), and they loved it. I had to tell them afterwards that washing dogs is not always this easy! 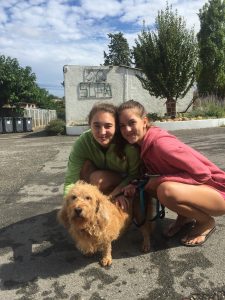 Hazel and Léa with the newly washed Friponne – ADOPTED

When dogs leave out of usual refuge hours, it is usually because they are being transported with TRACES, and that either Moira or myself has been up in the wee small hours to meet the vehicle. This time it was a bit different, as Friponne, was going in the opposite direction. This lovely elderly fauve de Bretagne has been adopted by a family in Portugal, so the lovely people from Purrfect Pet Transporters came to collect her on their return journey from the UK, where they had been delivering lucky dogs and collecting donations for their association.

Then today, there were two further adoptions. First to leave was little Coco. She is a shih-tzu cross who was brought in for rehoming yesterday at the age of under four months. Her family had adopted both Coco and her sister, and this might be a lesson to anyone thinking of adopting two dogs from the same litter….quite often it does not work. I can feel a blog on this subject coming on…..The best thing for Coco was to find a new home, and before the refuge had even opened, she had been reserved by one of the many volunteers who gives up their free time to beautify the refuge.

Great news for both Coco and her new owner. Less than 24 hours at the refuge isn’t bad, is it? 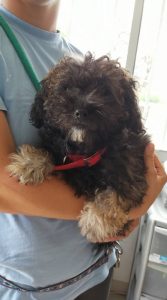 Last of the day’s adoptions was that of Gaby. She was brought in for rehoming with her “brother” Roddy, who was adopted a couple of weeks ago. A fabulous border collie cross of some 6 years old, Gaby would have been adopted a couple of weeks ago had her relationship with cats not been quite as ambiguous. Today’s family have no cats, but they do have another dog, and we are hopeful that Gaby’s gentle nature helps the family’s other gain in confidence a bit. 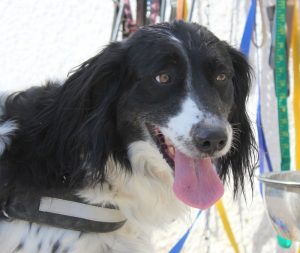 So it was a good day all round and hopefully more adoptions to come before the week is out.