Today was the first Sunday of the month, so as usual the refuge was open. The sun shone, and we had a team of volunteers to walk dogs and introduce people to the dogs and cats (and vice versa). We don’t necessarily expect adoptions or even reservations to take place on these days, but for many people it is the only time they have as a family to come and visit the SPA, and quite often reservations follow once everyone has had time to reflect and discuss. One family came to walk dogs, saying that it was an opportunity for the whole family to do something outdoorsy together, and it kept the kids away from the TV and video games. Much better to be out in the fresh air!

That doesn’t mean there is no news however.

A tiny jack russell cross was brought in today; or rather he was shown to us before leaving again with the couple who found him. He is tattooed but it is so faded as to be illegible. Maybe the vet will have better luck tomorrow. In the meantime the dog is safe and is being looked after. If you recognise him, please contact the SPA who will put you in touch with his temporary owners!

And who remembers Coraline, the little old jagd terrier cross dog who spent a couple of weeks in foster with Lorena before going to Twilight, the doggy retirement home? Twilight is usually a dog’s last home, where they receive end of life care and love thanks to two very special people and great friends of the SPA, Leeanne and Mike.

Sometimes however a miracle happens, and a dog is adopted from Twilight and given a home of his or her own. Leeanne and Mike have loads of love to give, and their dogs are very happy, but of course if a dog leaves it makes room for another. Usually a dog leaving Twilight involves tears, as it is usually a trip over the Rainbow Bridge. This time it was tears of joy, as Coraline left for her new life! Here she is looking very pleased with herself. And who can blame her!

And we already have news of Rizzla, who has been renamed Oscar and is looking very pleased with himself in this photo with his new jack russell pal, Jack.

We also received a message to say that Paterson and his owner have just completed their “certificate of aptitude” for good dog manners. That is after 2 months of classes. Many congratulations to them, and thanks for seeing the potential in this young, rather bouncy dog, who has now clearly become a beloved family member. 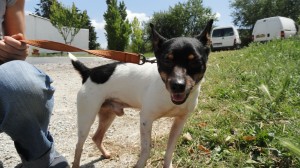 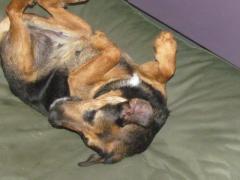 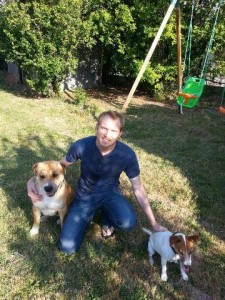 And Paterson’s mum gets a good  owner award! 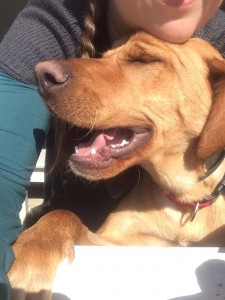 2014-06-01
Darcey Dyson
Previous: Three adoptions and a lovely day in the sun!
Next: Arrivals, adoptees, and little jack finds his home.