We hardly ever have adoptions on Mondays and sadly today ran true to form. In fact we had two new arrivals. A third dog arrived but was identified so was able to leave immediately with his owners.

Neither of the new dogs is identified, and in fact one of them requires an operation to remove a huge tumour. It is not as large as the one that Misery arrived with, but it is clearly in need of veterinary intervention. I could be wrong here, but a little bird tells me her owners are not going to come and collect her. It is far more likely that this dog is at the SPA because treating her will cost money. Money that her owners either do not have or would prefer to spend on something else. I would love to be proved wrong, though.

Even things that are legal obligations are enough to put people off collecting a dog. If a dog or cat arrives at the SPA non-identifed then he or she cannot leave before this has been done. This is not our rule, it is French law. The SPA takes (and makes) no money from the process, and we want dogs (and cats) to go back to their homes. We have quite enough animals at the refuge already.

As for sick animals, they are the responsibility of their owners. If you love an animal, why not cure it? Insurance is available, but if you don’t have that, then try putting a bit of money aside per month for unexpected events. And many vets will allow you to pay over several months if you explain your circumstances. In addition there are some SPAs that also act as veterinary dispensaries, and they will help you out if they can.

Abandoning an animal and expecting the SPA to pick up the tab is not very nice, to be honest. But I suppose if you love your dog or cat you wouldn’t do it, so perhaps the best thing is for the SPA to find him a new, LOVING home.

On a brighter note, for those who have not seen this photo, here is recently adopted Zara wearing a hat. Who doesn’t like a dog in a trilby?! It certainly cheered me up! 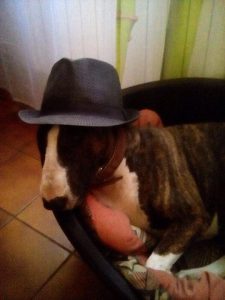 2016-10-10
Darcey Dyson
Previous: Pictures of Lily (and Faro and Bean)
Next: Toufou leaves and so does a rabbit.