When Pip arrived at the SPA in April a tiny, terrified pup, little did she know just how much her luck was going to change!  Foster places for pups are scarce but as luck would have it Lisa our puppy fosterer extraordinaire had a place free!

Lisa is a vet nurse and has four dogs and cats of her own so puppy Pip was ensured the best of care and lots of socialisation.  This is so very, very important for a pup and has such a massive effect on its future that we would love every pup that comes into our care to receive it.

Pip thrived in Lisa’s care and it wasn’t long before she was available for adoption. Angie and family who adopted Garfield and who are massive Brittany spaniel lovers noticed Pip on our facebook page and contacted us right away. The only problem was that they live in Cruden Bay, Scotland and Pip was in Carcassonne, South West France.

Logistics have never been a problem for us at the SPA Carcassonne and if we know that there is an experienced loving home waiting we will pull out all stops to get the dog there. Again luck came into play and as I was driving home to Dundee on the 1st August it was the perfect opportunity for Pip to travel home with me to Scotland.

I collected Pip on Friday afternoon and we set off on our journey later that evening. As it was scorching hot in France, even with air conditioning and cool mats its not comfy for the dogs in the car during the day so we travelled through France overnight. This worked well as the dogs were sleepy, cool and comfy and as we needed fewer stops we made good time, arriving in Scotland 26 hours later!

Angie and her hubby drove down to Dundee and when they saw Pip I could tell that their hearts just melted. Pip was delighted to meet them and jumped in their car without a backward glance. Later that evening she met her new brother Garfield and Angies two lovely daughters Rylee and Brodie. Angie did say that they were at home in bed and I have to say that I thought to myself that there is no way that they will be asleep when they know a new pup is on its way!

Pip is the sixth SPA Caracssonne dog to come to Scotland for their forever family, I wonder who will be next?

There was also good news at the refuge today, Teddy who arrived yesterday after bring found loose was reclaimed which is great news as I am sure that he would have hated being back in the refuge after having a family of his own! 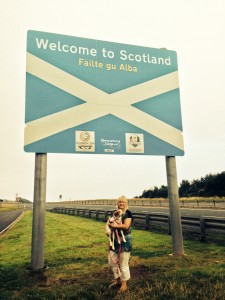 Pip and Garfield – A stunning pair! 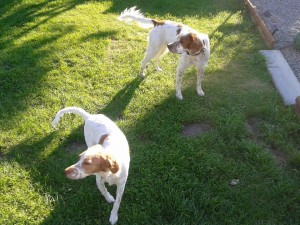 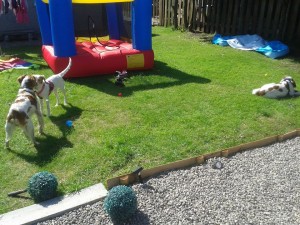