Well, it took longer than we expected, but today Pixel left for his new home. He was one of the ever increasing number of dogs who arrive at the SPA following the death or illness of their owner, when there is no family or at least no family able or willing to take the dog. Pixel arrived ten days ago, and we thought he would leave immediately. But ten days is not too bad, all in all. Today he left with a new friend, too, so he will have a lovely life and we hope his time at the SPA will soon be forgotten.

Another dog who is putting the SPA behind him is Titou. He is the very old bichon who arrived just over a week ago. He was not in very good condition at all, and we were busy lining up potential foster families for him for when his pound time ended. It turns out his owners were looking for him, but like so many other people, they did not think of the SPA. Today they came to collect him and were had a chat about the correct way to care for an elderly dog. Sometimes the love is there in spades, but people just don’t have the knowledge to care for an animal as well as others might.

Titou’s place in the infirmary was immediately taken by another arrival, whom we have named Roosevelt. He too has arrived at the SPA following the death of his owner and was lucky to be rescued from his home by the police. Perhaps a family member will come forward for him, miracles do happen…But he is “only” ten,  and he is small, so even if not, we hope we can find him a new home.

At the other end of the scale, we had a puppy-sized package left at the gate this morning! Meet Lola; isn’t she beautiful? 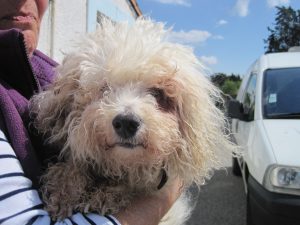 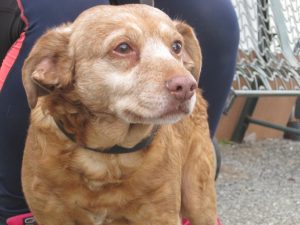 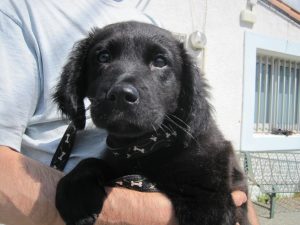