Six dogs arrived at the SPA today, but four of them left straight away, as they were identified. That is how things SHOULD work, as identification is obligatory. In fact all six should have been identified, but one of them is a puppy, and I am not sure of his age, so perhaps the owners can be excused….EXCEPT that it is illegal to sell or even give away a puppy of under eight weeks and who is not identified. Could this be the first of the Christmas rejects, I wonder? In any case, the lucky pup has gone home with volunteer Isabelle, so will be warm and loved until a home is found.

There was one reservation today and although I am not going to tell you who is leaving (I am far too superstitious for that) I want to just talk about this adoption. Mostly because I love the whole concept and I was so excited that I (unusually) mentioned it on my Facebook wall, which led to me receiving lots of fabulous comments and one of the nicest ever pictures of one of our dogs in his post-SPA life.

Basically a woman wanted to adopt a dog who is okay with chickens. Now we have a cat house at the SPA, but even the cat test is not infallible (as some of you have learned to your cost), but we do not have chickens. So what better way to test a dog with chickens than to bring along your own? I was not at the refuge on Monday when this took place, sadly. But long story short, of the several dogs who cut the mustard (ie who did not attack the chickens), one was chosen and will be leaving us soon.

But look at this lovely photo of Guismo, who was adopted in February last year at the age of ten. Shows the maturity of the older dog who knows when he is well off and is not going to risk losing his wonderful home just for the sake of a few pesky hens! 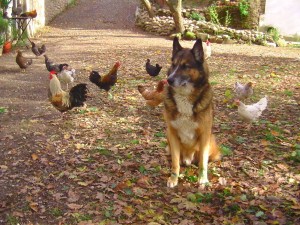 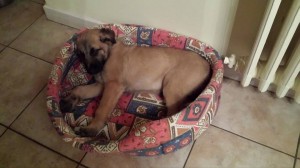