Home / Life After The Refuge / Pollux 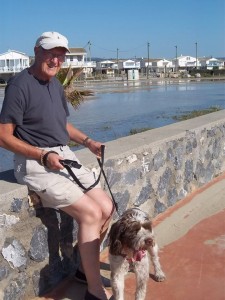 We wanted a dog but it wasn’t supposed to happen until I joined my husband in full time retirement in our house in France. However the sight of a scruffy, hairy Griffon Korthal cross called Pollux on the SPA Carcassonne website changed all that!

We collected our handsome boy from the SPA in Carcassonne on 25th September last year and, despite never having seen him in the flesh before, fell immediately in love with him. Moira and Rowan took care of all the adoption process over the phone and by e-mail. So, with the paperwork completed and farewell tears shed by volunteers, we began the long drive back to the Lot Valley and Pollux’s new home.

Yes, we kept the name Pollux, which always causes great hilarity amongst our English speaking friends, although it is actually the French equivalent of Dougal from the children’s TV programme “The Magic Roundabout”. It is, however, a popular dogs’ name in France and many of our French friends and neighbours talk fondly of their own dogs who were also called Pollux. In fact, more people know his name than know ours and he often gets a “Bonjour Pollux” from the local bar as we pass.

I can’t say that the whole experience has been a breeze and sometimes it has been quite hard but with a lot of patience we have all settled down to a happy life together.

When he first arrived home, Pollux preferred to stay outside on the terrace and only came into the house to sleep at night. He had to be coaxed into eating and practically fed by hand to get him to eat anything – so different from now when his food is wolfed down in less than 5 seconds. On the positive side, he did sleep through the night without any crying or barking and was housetrained. Well I say housetrained, he did have a problem in that he peed every time he was excited or frightened, which in those first few months happened very frequently. We have since been told that this is a well-known problem with Springer Spaniels, so maybe that’s who his dad was. Anyway, he is getting so much better with that little problem and it is now safe for us to go upstairs and come back down without having to stand with our legs spread to avoid the unavoidable excited wee and yet another change of clothes.

Pollux was, and still is to some degree, wary of men, sticks and big gloves. We don’t know what his background was but there does seem to have been some sort of ill-treatment at some point.

He also didn’t like the broom or vacuum cleaner but he is getting better with them as he realises what they are and they are not going to hurt him. People always ask us what language we speak to a French rescue dog in, well we have always spoken to him in English but he certainly understands the word biscuit in many different languages now.

As the weeks and months go by we are always learning new things and have recently enjoyed our first seaside holiday together. Pollux really loved the beach and the sea and impressed us by lying down in restaurants so that we could actually eat out.

He is a real comedian and can make us laugh out loud with his antics and funny ways. He is also very affectionate and loves having a cuddle, leaning in hard against our legs or snuggling up on the sofa to watch television. He is quite selective with his television likes and dislikes and has taken to growling at Prince Charles, Ed Balls and Alexander the meerkat on the TV advert which now means we have to distract him whenever they come on.

We are so pleased to have adopted him and he has brought us a lot of love, happiness and laughter over this past year. Thank you Dog Rescue Carcassonne for bringing Pollux into our lives.